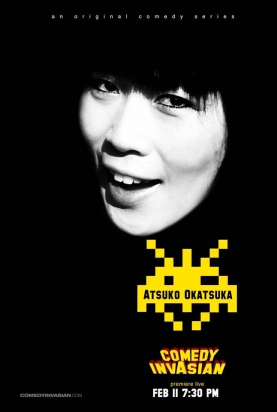 The event is part of Comedy InvAsian, a live and filmed series featuring six of the nation’s top Asian and Pacific Islander American (APIA) comedians each performing a one-hour special.

Okatsuka is the co-founder of Disoriented Comedy, the first-ever all Asian, mostly female stand-up comedy tour. She has performed on Comedy Central Presents: Stand Up, Asia! and has opened for Korean-American actor Margaret Cho.

In addition to Okatsuka, the comedians Paul Kim, Joey Guila, Robin Tran and Kevin Yee will also perform one-hour shows at JANM throughout the month of February.

“Comedy InvAsian will celebrate the talent and comedy of a group of select and diverse Asian American comedians, which should prove to be just the tip of the iceberg,” said producers Koji Steven Sakai and Quentin Lee.

Victor Elizalde, president of Viva Pictures, the show’s production and distribution company, says in an interview with NBC News, “Some of the comedians are relatively clean, some are much more edgy. We’re not sure what’s going to work here and I think that represents the Asian community. It’s very diverse within itself, and so this will showcase that.”