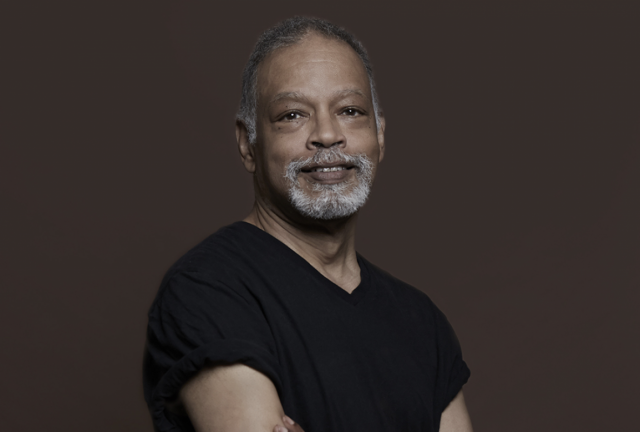 Choreographer Ishmael Houston-Jones spent last week (Feb. 6-10) lecturing and leading improvisation workshops for students in CalArts’ School of Dance. In his lectures, he talked about how dance curation differs from art curation, and he also presented highlights from his recent work. He was one of five artists to each receive the $75,000 Herb Alpert Award in the Arts (HAAIA) last May. Since 1994, the Herb Alpert Foundation, in collaboration with CalArts, has been awarding the unrestricted prize to exceptional mid-career artists in the fields of dance, film/video, music, theatre and the visual arts.

For more than three decades, Houston-Jones has been creating innovative performances that feature improvisation over set choreography. When describing his process, he says, “my dances always start with some kind of kinesthetic root. It just begins with the body moving. But it can take many, many different forms. Sometimes it’s informed by a text, sometimes by music, often by a theme, or combinations of those things.”

His 2014 performance with collaborator Emily Wexler was titled 13 Love Songs: dot dot dot and was inspired by the lyrics and hyperbolic sentiment of contemporary pop love songs. Part dance, part performance art, the duo channeled the emotions of each song like Aretha Franklin’s “I’m in Love,” by rubbing raw onions into their eyes until they began to cry. Houston-Jones says, “The whole piece is about the sorry state of our love lives, and how we’re both really hopeless romantics, and we’re always getting hurt. So, we chose 13 songs to work with. And I love that Aretha Franklin song. That’s all she says is ‘I’m in love, I’m in love, I’m in love,’ and I just wanted to be crying, but for the tears to be artificial, to acknowledge the artifice of the crying.”

Above: Ishmael Houston-Jones and Emily Wexler talk about ’13 Love Songs: dot dot dot,’ including rubbing onions in their eyes for one of the songs.

Houston-Jones’ life experiences have always helped to inform his work. In his early twenties, he moved to Israel to work on a kibbutz, or a communal farm. Of his time there, he says, “Living that life taught me the pros and the cons of socialized living. My work is very communal. I like collaboration with communities, as well as individuals.”

He is also is an activist, and during the 1981-1996 AIDS epidemic in NYC, he spent time delivering food to homebound people living with the illness. In his most recent work, Houston-Jones co-curated a six-week program of performances, panel discussions and talks about the deaths that occurred during the crisis.

Houston-Jones says the Herb Alpert award helped tremendously when it came to planning his projects. “The platform I curated last fall was actually several years in the making, and last year was very intense. A lot of organization, a lot of moving parts. The Alpert allowed me to take time off from teaching so I could be really focused on both making the pieces and curating the platform with Will Rawls, my co-curator.”

For his next big project, Houston-Jones plans to write a book about the teaching and study of dance improvisation. “The Alpert award has taken the financial pressure off so I can breathe and relax about money, and just pay more attention to the work I’m doing.”