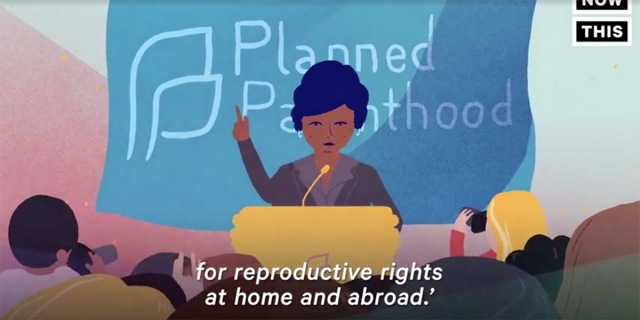 Screenshot from ‘The History of 100 Years of Women’s Health Care at Planned Parenthood.’

Kirsten Lepore (Film/Video MFA 12) co-directed an animated video with actress Lena Dunham for Planned Parenthood’s centennial. The short educational video, which has tallied more than 3 million views on Facebook since its Jan. 16 release, combines stop motion animation, illustration, and archival photos and audio to document the nonprofit organization’s past 100 years.

The duo created the video in response to Republicans pledge to strip the organization of federal funding. In a press release, Dunham wrote, “Our goal was to create a piece of art that can educate Americans not just about what Planned Parenthood does but on the battles that have been fought in order to get here.”

Narrated by actors Meryl Streep, America Ferrera, Constance Wu, Mindy Kaling, Jennifer Lawrence, Hari Nef and many others, Lepore and Dunham’s video covers the major milestones in women’s reproductive health, including the clinics Margaret Sanger first established, the invention of oral contraceptives and the monumental Supreme Court case Roe v. Wade. It also highlights the negative impact that rulings like the Hyde Amendment made, especially for low-income women with less access to birth control. It also acknowledges Sanger’s own complicated history relating to her involvement in the Eugenics movement.

“For 100 years, women and families have counted on Planned Parenthood. Politicians may try to shut us down, but we will fight to keep our doors open—while continuing to provide expert, affordable healthcare to millions of people each year,” she says. “We will not rest until access to health care and rights is a reality for all people.”

The film was produced by J.J. Abrams and was released through Dunham’s Lenny Letter and the organization, NowThisHer. Watch the entire film below.

Above: Animated Video on the History of Planned Parenthood by Kirsten Lepore and Lena Dunham.