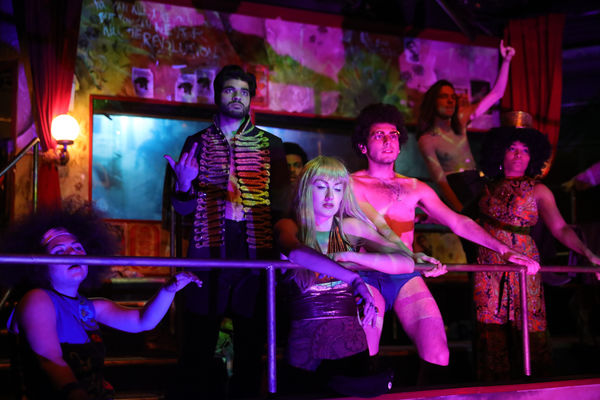 CalArts’ School of Theater is in the midst of a new production helmed by guest artist and former CalArts faculty Roger Guenveur Smith with design by BFA students.

The Hendrix Project is about the experiences of 12 disciples of Jimi Hendrix at the legendary artist’s 1969 New Year’s Eve concert at the Fillmore East. Hendrix is performing with his electronic blues trio, The Band of Gypsys, and ignites the crowd in the counterculture spirit of the times with a dedication of his concert to the soldiers fighting at home and abroad in Vietnam. The psychedelic nature of the performance is rooted in its premise of an audience watching an audience, and is further highlighted by the actors’ slow-motion movements and the absence of spoken lines.

Smith is an actor moving between theater and film. He has directed several workshops at CalArts as well as performed his solo shows, Rodney King, and Frederick Douglass Now. Smith with long-time collaborator, Spike Lee, will be releasing a film adaptation of Rodney King for Netflix in April.

The Hendrix Project began its initial run on Friday (Feb. 17) and continues until Saturday (Feb.25).