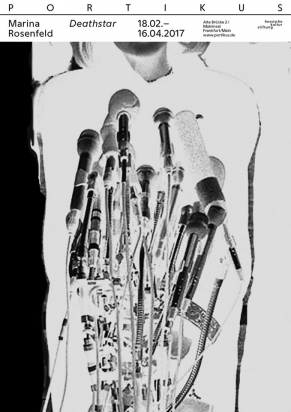 Marina Rosenfeld (Music-Art MFA 94), an accomplished artist and composer, created the work Deathstar for her first solo exhibition in Germany at the contemporary art institution Portikus in Frankfurt, which opened on Feb. 17.

The artist’s work, which combines modern composition, performance and installation, often occupies monumental sites and includes groups of performers such as choirs, orchestras and other large ensembles. She has shown at museums and galleries such as Tate Modern, Museum of Modern Art, Guggenheim and the Whitney.

Deathstar refers to an abandoned research project conducted at AT&T (formerly Bell Labs) during the ’90s. Its aim was to reproduce a sensory account of the experience of one space within another. Deathstar transforms the gallery into a kind of sound art laboratory in which continuously recorded sound from the room is collected, translated through an interface, and then played back throughout the space—creating a kind of echo chamber. The conceptual grounding of the work happens as the collected sound is converted into notation, so that, to quote the website, “sound is neither an abstraction nor a means to an end, but rather a material condition connected to the formation of music.”

Deathstar is on view through April 16. On March 31, 2017, pianist Marino Formenti will perform the accumulated notations of the exhibition until that date.