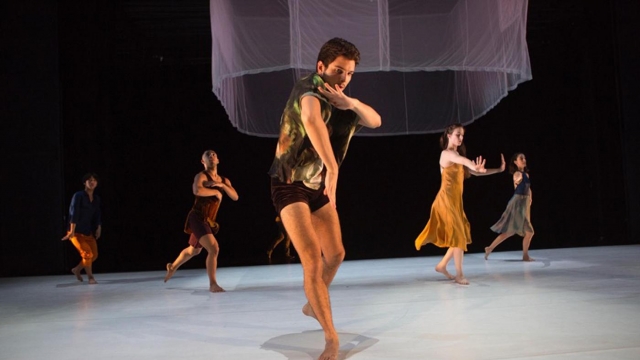 CalArts faculty and choreographer Rosanna Gamson will present her dance-theater production Still/Restless this Saturday (March 18) at 8 pm at El Camino College in Torrance, Calif. The performance, comprised of “intimate and volatile” duets, is inspired by Oneirology, the study of dreams. It is accompanied by a wide range of musical styles ranging from works composed in the 17th century to contemporary post-rock instrumentals.

Gamson staged Still/Restless at the Roy and Edna Disney/CalArts Theater (REDCAT) last year as a two-act performance that built on Gamson’s original piece Still. Still debuted at REDCAT’s New Original Works Festival in 2014 and was reviewed as “a beautiful dance of the psyche…. a very sensual and quite unforgettable experience,” by Broadway World. REDCAT’s program notes state that when combined, Still/Restless is “rich with tender and violent movement, explosive athleticism and stunning moments of stillness.”

In Gamson’s artist statement, she writes:

While striving to build a complete aesthetic world for each project, I use the structural conventions of melodrama—a narrator asking moral questions of the audience, big theatrical effects, virtuosity, heightened emotion set to music—inviting audiences to connect to the resonance of the subject and the legibility of theatrical metaphors.

Gamson earned both her BFA and MFA in dance at New York University’s Tisch School of the Arts. She has performed around the world in the dances of Yvonne Rainer, workshop performances of Robert Wilson, and was a member of Andrew DeGroat & Dancers. In addition to dance, Gamson studied poetry with Charles Simic, Louise Glück and Thomas Lux and her poems have been published in many literary magazines and journals.