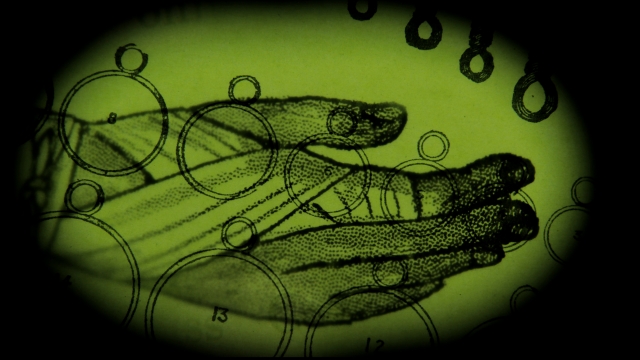 Geiser, a renowned multidisciplinary artist, shows eight short films in the program Double Vision at the Knoxville Museum of Art on March 25. One of the films is Flowers of the Sky, made in 2016. The title comes from the medieval term for comets and creates a link between the film’s subject: two panoramic photographs, found in a Los Angeles thrift shop, which depict a gathering of members of the Eastern Star, a Masonic order. From the program’s description: “There is a sense, looking at the photographs, of watching and waiting for something to happen, something beyond the experience of daily life. And something does. Nature reasserts herself, the figures double, vibrate, and rise, trying to escape their emulsive lives, suggesting a rapture that extends beyond their printed world.”

The artist’s films, which feel both carefully crafted and mysteriously dreamlike are constructed with layers of sound and found images and objects. The recontextualization of found images are beautiful and haunting as KCET writes, “her projects send back mysterious intelligence about the roiling nether lands we largely fear to traverse alone. Geiser is a guide to the other side, wherever that ‘other’ might be.”

The Big Ears Festival’s larger film lineup includes the programs Flicker and Wow 1 and Flicker and Wow 2, with De Laborde’s film As Without So Within, Levine’s Them Apples, 1_ _ _ _1 by Hahn,  Parallel Inquiries by Nguyen, and Spotlight on a Brick Wall by Alee Peoples and Mike Stotlz. The screenings take place on March 26 at the Knoxville Museum of Art.

As Without So Within reworks and illuminates several fundamental components of experimental filmmaking: abstraction, sculpture, and the material of celluloid. Them Apples runs The Beatles’ “Back In The U.S.S.R.” through iTunes Visualizer to create an optical sound experiment in which synesthesia and pop cultural memory are turned back on themselves. 1_ _ _ _1 was shot on super 8mm film and explores cinematic suspense and tension. Parallel Inquiries, Nguyen’s MFA thesis film, looks into the analog film system creating a direct relationship between sound and image. Spotlight on a Brick Wall is a performance film that navigates expectations of both the audience and the makers with a series of false starts and a dub treatment on the laugh track.

On the music side of the festival, Herb Alpert School of Music faculty Steve Lehman, an acclaimed saxophonist, performs as SÉLÉBÉYONE on Saturday, March 25, at 8 pm. His newest jazz infused hip-hop project is a collaboration with Senagalese rapper Gaston Bandinic and Anti-Pop Consortium’s High Priest.

Read an article about SÉLÉBÉYONE’s performance in Rolling Stone.

A Wave and waves, an epic work for 100 musicians written by School of Music Faculty in Composition, Michael Pisaro, concludes the ensemble, Neif-Norf’s performance on Sunday, March 26 at the Big Ears Festival.