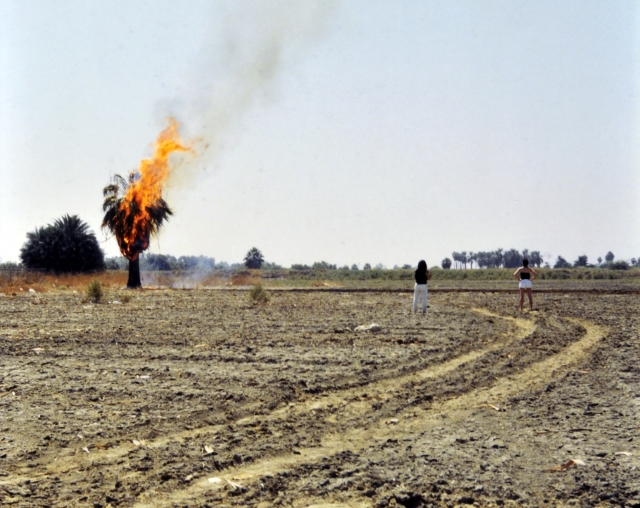 Still from Queen of Diamonds. Photo: Courtesy of Artist

Deeply respected filmmaker and School of Film/Video Nina Menkes often refers to the sorcery of her work that evokes meaning and truth outside of traditional narrative cinema. Film critic and CalArts faculty Bernice Reynaud writes, “She has no master and no disciples, which forces her to reinvent the history of cinema in her own terms.”

Most recently, Menkes was invited to participate in the symposium, The Shock of the Real, which is part of the 50th Anniversary Celebration of the Deutsche Film-und Fernsehakademie Berlin (dffb) in Berlin, Germany. The symposium looked at present and future forms of reality in film and was held this weekend (March 24-26). Menkes presented her 1991 feature film Queen of Diamonds, and taught classes for the public and dffb students.

Queen of Diamonds premiered at Sundance Film Festival, making Menkes one of the first female filmmakers in dramatic competition. The film was named one of the Year’s Ten Best by the Los Angeles Times, Film Comment, The Atlanta Art Papers as well as many other publications. Shot on location in Las Vegas, Queen of Diamonds follows the everyday life of an alienated blackjack dealer played by Menkes’ sister, the actress Tinka Menkes. The hollowness of the desolate landscape is examined through the richness of both Menkes’ cinematic voices.

Dffb’s public master class taught by Menkes was titled Cinematic Images of Women: Power and Gender in Shot Design. The class she taught for dffb students is Myth / Document, and will be moderated by German filmmaker Nicolas Wackerbarth.

Read an article in the New York Times about the filmmaker.