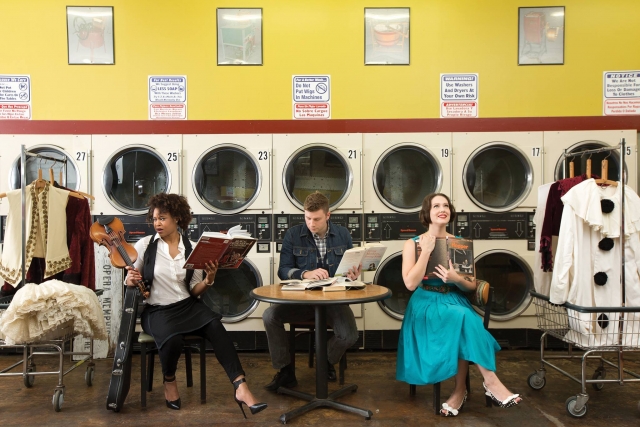 Composer, violinist, violist and CalArts alumnus Andrew McIntosh (Music MFA 08) brings his musical talents to the stage during the Midtown Opera Festival, held at Playhouse On the Square in Memphis, Tenn. from March 31 through April 9.

McIntosh, who is also a faculty member of The Herb Alpert School of Music at CalArts, performs the violin and viola in two theatrical productions, first in Arnold Schoenberg’s classic Pierrot Lunaire on April 7, and in Peter Hilliard and Matthew Boresi’s Blue Viola on April 7-8, where he is the featured viola soloist.

Pierrot Lunaire is one of Schoenberg’s most famous works. Staged as a melodrama set to music, it is comprised of 21 poems divided into a three-part narrative structure. The title character is a moonstruck, jilted clown borrowed from the late-Renaissance world of Italian commedia dell’arte, but reimagined as a figure for the modern alienated artist. The performance also brings a new multimedia experience to the 1912 poetry-based opera, featuring projections of Memphis-based Joey Miller’s photography.

Blue Viola follows the journey of a priceless viola from its original owner to a junk dealer, who sees it as a lost treasure in need of rescue. But his girlfriend, Arnita, has other plans. Infused with the sounds and styles of the blues, the opera will appeal to its Memphis audience and any lover of this musical genre. The D.C. Theatre Guide says “mingling classical with blues and jazz, the music was robust and evocative, with humor and charm.”

Opera Memphis’ fifth annual Midtown Opera Festival is anchored by three intimate operas, all by living American composers. Surrounding the primary operas are fringe events which expand the definition of what an opera festival can be.

In case you’re not in Memphis this weekend, McIntosh and/or his works will be featured in several other events this spring:

April 9
The Broad Stage presents the Calder Quartet
The Calder Quartet premieres a string quartet McIntosh wrote specifically for the ensemble, called wrestle, stain, whistle, pound, which will be performed alongside Beethoven’s Op. 18/2 and Op. 59/2.

May 8
The Ensemble at CalArts in The Wild Beast
Violinist Lorenz Gamma and McIntosh perform the solo violin parts in Alfred Schnittke’s Concerto Grosso No. 1, for two solo violins, harpsichord, prepared piano, and 21 strings, with the orchestra at CalArts under the direction of Nicholas Deyoe.