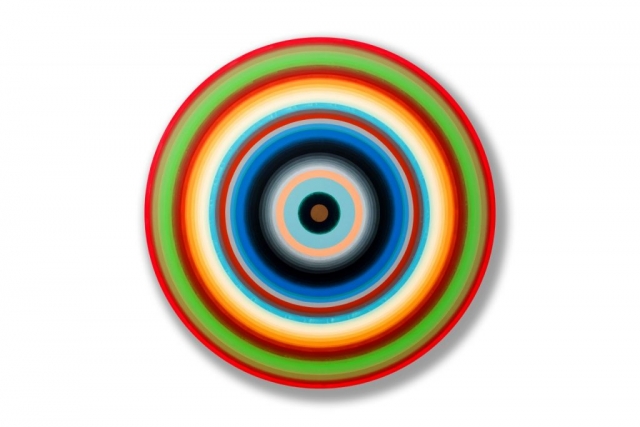 Painter and CalArts alumnus Gary Lang (Chouinard 68, Art BFA 72) is one of five recipients of the 2017 Francis J. Greenburger Awards, which honor “established artists whom the art world knows to be of extraordinary merit but who have not been fully recognized by the public.”

Lang’s work explores repetition and color to brilliant, nuanced and jarring effect. “The process is ultimately a pleasure-driven meditation on accumulating and organizing energy, while investigating the potential of color,” Lang said in an artist statement.

In a review of a 2014 solo exhibit at Ace Gallery for The Los Angeles Times, critic David Pagel writes:

Lang’s paintings pulse, hum and throb. Some are abuzz with electrifying energy. Many seem to be breathing, their rings appearing to protrude into the room and then, as if exhaling, to tunnel back into deep space. Time doesn’t stand still so much as every second seems to be so full of so much good stuff that it seems longer than usual.

The Francis J. Greenburger Awards are an unrestricted $12,500 prize established in 1986 after a conversation between Omi International Arts Center founder and chairman Francis J. Greenburger and friends André Emmerich and Clement Greenburg. During the conversation, Emmerich said, “The best and brightest artist of each generation are known, but not to everyone. Ask the inner circle and they can tell you.” The statement serves as an inspiration and founding principle of the awards.

Rounding out the winners list are Ryszard Wasko, Lorraine O’Grady, Barry Le Va and Judy Pfaff. The awards will be conferred at a ceremony on April 25 at the New Museum in New York. Lang’s award will be presented by artist and fellow CalArts alumnus Eric Fischl (Art BFA 72).