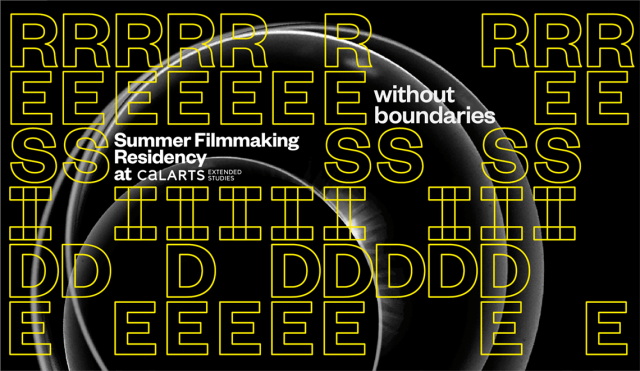 The Summer Filmmaking Residency is accepting applications, with a preferred deadline of April 17.

Deborah LaVine is faculty in the Film Directing program and leads the Summer Filmmaking Residency, happening May 20 to June 24 on the CalArts campus. She spoke with the 24700 blog about why making films using consumer-level equipment can be both a practical choice as well as an aesthetic one.

24700: Why would it be important for emerging filmmakers to learn how to make films using inexpensive equipment?

Deborah LaVine: The art of cinema is no longer relegated to one technological form. Cinematic storytelling is a holistic art form that encompasses writing and performance with both visual and aural elements. Each tool and piece of equipment, from high- to low-end, creates a particular aesthetic that paints very specific textures into the work. Filmmakers should be familiar with the different tones that the variety of film equipment available can create.

Also, with new modes of presentation carving up the distribution landscape, filmmakers need to learn how to work independently and be able to make work no matter their budget. Emerging filmmakers are more likely to screen their work on digital platforms or in festivals, rather than single billing in huge places. These avenues embrace authentic and original ideas born from passion and creative impulses, rather than generated by big budgets and fancy high-end tools.

24700: Do you have a significant example of a film made on consumer- or prosumer-level equipment? Why was it significant the filmmaker chose to make their film that way?

DL: Sean Baker’s film Tangerine is a great example—the film played at Sundance and received big distribution. It is one of the best examples of filmic mastery using an iPhone. The colors Sean captured with that tool caught the Los Angeles street scene in a heightened sense of romanticism while offering a scathing look at voyeurism. Using the iPhone created a sense of a lived-in moment—it was that familiar texture of an iPhone image that helped the audience feel like they were living the moments along with the characters.

24700: Can you tell us about any specific breakthroughs or ‘a-ha’ moments among the participants in previous Summer Filmmaking Residencies? How did the program have an impact on their work?

DL: Many participants are uneasy when they are told not to worry about what equipment to use for making their film, but to focus on “what” their story is about. The truth is, working with equipment is the easiest part of filmmaking. Technology can be learned online, in short workshops or tutorials. So the emphasis of the residency is to focus on the film’s content, its narrative legibility and emotional tone. No one on the set can work with the actor besides the director. Only the filmmaker has the vision to fill the screen with the story they have created.

Previous participants in this residency have made extraordinary films in little time, with a whole lot of imagination and originality. The workshop pace is fast, furious and exciting! I try to expose residents to a wide variety of films—traditional, conventional, independent, experimental and more—most of which are not often screened in conventional film schools. I think they are amazed by how similar narrative and experimental filmmaking is, both in terms of strategies and tools. I give the residents prompts and encourage them not to overthink or get stuck in self sabotage. It’s gratifying for me to see this group of filmmakers begin to trust their creative impulses and simply make work from sparks flying in the room.

The Summer Filmmaking Residency is a five-week opportunity for emerging filmmakers to live and work among a community of driven artists. Now in its fourth summer, this residency provides an immersive experience where story is of chief importance and the ability to create a cinematic event is as accessible as your smartphone. To apply, visit extendedstudies.calarts.edu/film-residency—the preferred deadline is April 17.