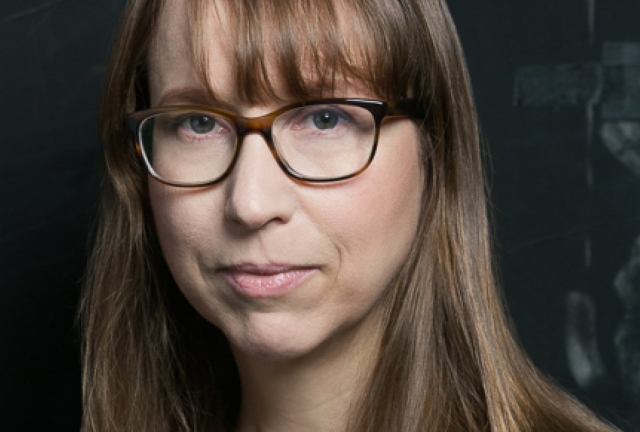 Earlier this semester, award-winning playwright Anne Washburn visited CalArts to work with students in the School of Theater in a multi-purpose workshop. The class discussion focused on activism in the theater, not only in how the act of communication and political discourse intersect, but also how to identify problems and resolutions for issues within the theater community itself. They also discussed the process of playwrighting.

Washburn was one of five artists each of whom received the $75,000 Herb Alpert Award in the Arts (HAAIA) last May. Since 1994, The Herb Alpert Foundation, in collaboration with CalArts, has awarded the unrestricted prize to exceptional mid-career artists in the fields of dance, film/video, music, theater and the visual arts.

Though her work is often described as experimental, Washburn is wary of the label. “I think I have equal allegiances, as a lot of playwrights of my generation do, to performance work, which I think is really exciting on one level, and to really traditional, merited theater, which I also love.” With an MFA from NYU and an undergraduate degree from Reed College, Washburn is well versed in classical Greek drama. She encourages students to invest time in studying the classics because of their content’s contemporary importance. “We think of Greek drama as so remote and so academic and theatrical in a way that isn’t relevant to us,” she says, “but if you look at work like Orestes by Euripides; it’s an insanely modern play. I feel like Euripides is more sophisticated and more ironic than anything we’ve done yet. I feel like he’s the step forward we haven’t taken.”

Many of Washburn’s plays are inspired by her immediate surroundings and overheard bits of language and dialogue. Her play Mr. Burns is based on an episode of The Simpsons and uses the memories of television and pop culture to create a new mythology in a post apocalyptic world. When asked what it is about the post-apocalypse that interests her, she replied, “Aren’t we all interested in the post-apocalypse?”

Mr. Burn’s particular dystopian fantasy, Washburn says, was written in response to living in New York after 9/11, when the fear of being attacked again loomed over the collective psyche of the city. “There’s catharsis in a post-apocalyptic narrative because there’s no longer that sense of suspense or impending danger. It’s all about coping with the reality of the present and not having to deal with the terrible thing that could happen. I equate it to Little House on the Prairie or any narrative about a simpler time in the past. Or, like, ‘Oh all I would have to worry about is getting through this‘ and that seems simpler than worrying about both terrorists and my career and my rent all the time.”

Washburn says The Alpert Award has been an incredible gift as she works towards developing her next production. “It’s just been amazing, to have the time and space for you to do your own work. I’ve been able to have a year where I’ve done much less teaching, and I’ve been able to go out of town for projects and also just spend more time just focusing on what I’m writing.”