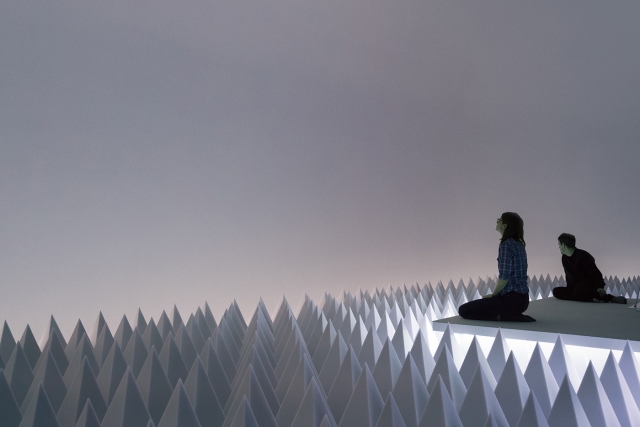 From the museum’s exhibit notes:

For PSAD Synthetic Desert III, Wheeler has altered the structure and configuration of a museum gallery in order to control optical and acoustic experience. He has transformed the room into a hermetic realm, a “semi-anechoic chamber” designed to minimize noise and induce a sensate impression of infinite space. Wheeler likens this sensation of light and sound to the perception of vast space in the deserts of northern Arizona.

Conceived in drawings in 1968, Synthetic Desert III came to be as part of an ambitious multiyear conservation project by the Guggenheim, which focuses on the groundbreaking Conceptual, Minimalist and Post-Minimalist artists in the museum’s collection.

Wheeler’s concepts are often so extremely costly and exacting to realize, that he himself offers that they’re very difficult to execute. Synthetic Desert III’s construction required a kind of floating room-within-a-room, resting on gaskets so that the chamber absorbs as little sound as possible from the structure of the museum itself. “The thought of being able to isolate a museum from the sound around it and in it is really a challenge,” he told The New York Times in an interview.

Because the work is best experienced with as few extraneous sounds and distractions as possible, only five people are allowed in the room at one time. The group enters the room through a series of sound locks and may remain inside for as long as 20 minutes.

Read The New York Times article about Synthetic Desert, where Wheeler talks about the challenges of getting his 15-decibel work heard amidst the 70-decibel noise of Midtown Manhattan.