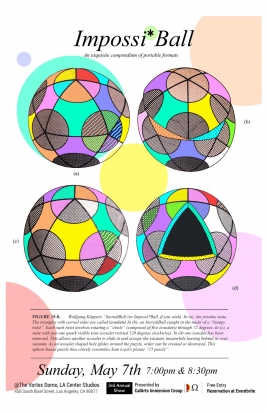 The CalArts Immersion Group, founded by CalArts faculty members Gordon Kurowski and Hillary Kapan, returns to The Vortex Dome in Downtown Los Angeles on Sunday to present works that are better experienced than watched.

The Impossi*Ball takes advantage of the venue’s 50’ diameter 360-degree cinema theater and performance area. During the program, audience members are allowed to lie on the floor and watch projections on the domed ceiling and immerse themselves in the art installations and live performances around them.

The performances at 7 pm and 8:30 pm on Sunday are free and open to the public.