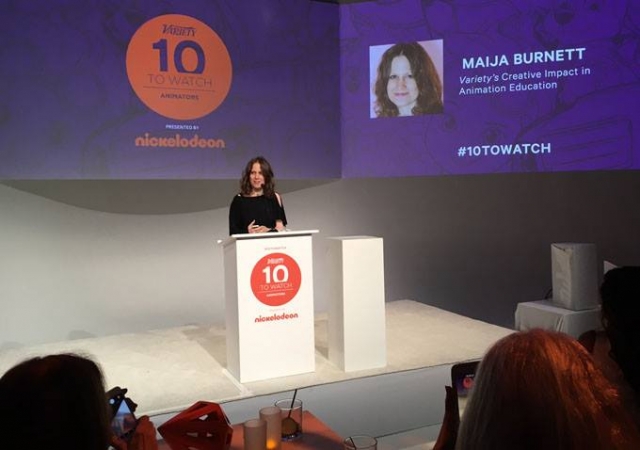 Maija Burnett receives her Animation Educator of the Year Award on May 4. | Photo: Jerry Beck

Variety, the venerable entertainment trade publication, held its annual 10 Animators to Watch event at Quixote Studios in West Hollywood on Thursday night (May 4). Among the publication’s honorees were two CalArtians: Director of Character Animation at CalArts Maija Burnett, who received the Animation Educator of the Year; and director, animator and alumna Kirsten Lepore (Film/Video MFA 12) as one of the “10 to Watch.”

Burnett, who joined the Character Animation Program at CalArts in 2009, spoke to Variety about the importance of helping students merge basic, fundamental fine art skills with digital technologies that are needed in today’s animation industry. During her remarks to the crowd at Thursday’s ceremony, she also discussed another important skill for educators: listening.

Congrats to a truly talented group of individuals, our 10 Animators to Watch. Thank you @nickanimation for your continuous support of the #10toWatch program – last night was a night to remember. #animation (Photo by John Salangsang/Variety/REX/@shutterstocknow)

Lepore’s recent stop-motion animation hit, “Hi, Stranger,” simultaneously won and creeped out the Internet, but Variety noted that even before “Hi, Stranger,” the animator had already amassed a notable portfolio in her short career.

While “Hi Stranger” put the director’s talent front and center, she was a notable creative force when the short broke out. Lepore’s unusual approach to stop-motion animation has earned her clients including Motorola, Google, MTV and Whole Foods, gigs with such companies as JibJab. She was tapped in 2016 to do the first stop-motion episode of “Adventure Time” and was commissioned to do a piece for “Yo Gabba Gabba.” She’s won both an Annie and an Emmy, and her work has played in more than 100 film festivals. Lepore is now working on an indie stop-motion feature.