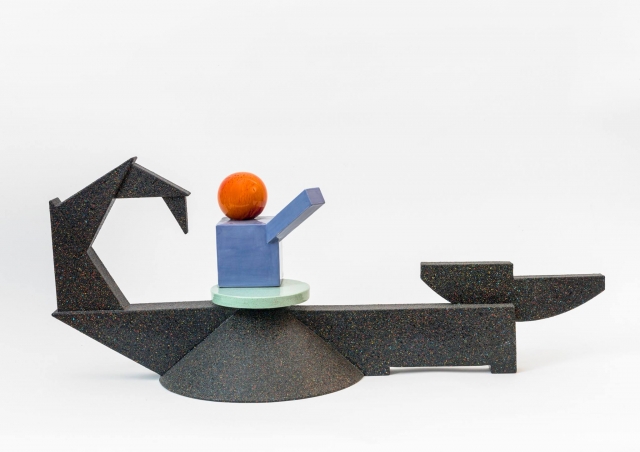 A large-scale survey of CalArts alum Peter Shire’s (Chouinard BFA 70) colorful and bold designs in ceramics and furniture are on view now through July 22 at MOCA Pacific Design Center in West Hollywood. The exhibition, Peter Shire: Naked Is the Best Disguise, showcases tables, lamps, and chairs— including one of the artist’s most iconic pieces, the Bel Air Chair (1981). The exhibition also includes more than twenty examples of Shire’s touchstone form, the teapot. Accompanying the works is a selection of the artist’s drawings that provide insight into his creative process.

It was Shire’s teapots in the early 1980’s that caught the attention of noted Italian designer Ettore Sottsass, who invited Shire to join Memphis, the legendary post-modern design collective in Milan. Inspired by popular culture, the group produced furniture, glass, ceramics and fabrics between 1981 and 1988. In an article from KCET, Shire reflects on his experience in Memphis, saying, “In Europe, Life is a proper noun. Objects have power and religion. We tend to think that art equals feeling, but design comes from a tradition of craft and then industrialization. Industrial design is about your own relationship to the machine.”

The members' opening of Peter Shire: Naked Is the Best Disguise at MOCA Pacific Design Center – this exhibition opens to the public tomorrow!

Shire, one of Los Angeles’s best-known artists, lives and works in the Echo Park neighborhood in which he was raised. His works have been exhibited in numerous solo shows, nationally and internationally, in Milan, Paris, Tokyo and Sapporo, Japan.