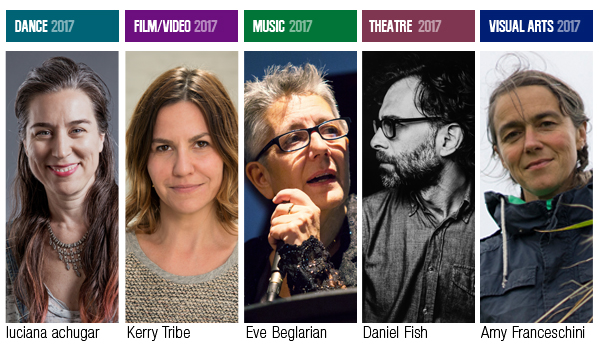 “Each year the Award recognizes five visionary mid-career artists who expand their fields as well as our horizons,” says President of the Herb Alpert Foundation Rona Sebastian in a press release. “We believe that championing the arts, individual artists, and arts education–from early childhood through professional development–has profound social, cultural and personal impact. This is at the core of the Foundation’s interests.”

“It’s particularly meaningful at this divisive moment to honor and support this year’s winners who are rigorous in their reach, alert to the world and make community as much as they make art,“ adds Director of HAAIA Irene Borger. She describes why each winner was chosen:

luciana achugar for her exciting, anarchic artistry, her big vision and her capacity to visualize and enact pleasure and beauty in the transcendent body.

Kerry Tribe for her fearlessness in rethinking and readdressing social issues and her ability to make surprising and moving connections.

Eve Beglarian for her prolific, engaging and surprising body of work, her deep engagement with different communities, her dedication to continuing to make experimental work outside the canon, and her risk taking in both music and life with no separation between these spheres.

Daniel Fish for his mesmerizing, bold complex imagination, his steadfast commitment to the art of possibility and the ways he unceasingly questions what theater might be.

Amy Franceschini for her brave, ethical, important cross-disciplinary work that grapples with critical issues of human survival, and for her prescient intergenerational and transnational vision.

Each Herb Alpert Award winner is asked to design and take part in a week-long residency at CalArts during the academic year of their award. Past winners’ residencies have included workshops, lectures, seminars, productions and concerts, as well as individual critiques of student work.

The winners will be presented with their awards at a lunch ceremony in Santa Monica, Calif., on Friday sponsored by the foundation.