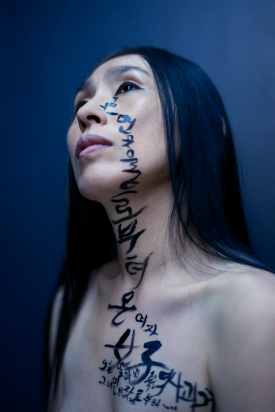 Multidisciplinary instrumentalist Dohee Lee visited CalArts in April to lead a workshop with students from The Herb Alpert School of Music at CalArts.

Lee was one of five artists who received the $75,000 Herb Alpert Award in the Arts (HAAIA) in May 2016. Since 1994, the Herb Alpert Foundation, in collaboration with CalArts, has been awarding the unrestricted prize to exceptional mid-career artists in the fields of dance, film/video, music, theater and the visual arts.

The Alpert awards selected Lee based on her “commitment to creativity and experimentation, her ability to give new life to ancient forms, create new environments—and new audiences—and her powerful, transformative vision.”

After studying traditional music and dance in Korea, Lee moved to the San Francisco Bay Area. She says collaborating with local jazz musicians opened her practice up to new experimental forms, and cross-disciplinary collaboration helped her find her creative voice. Combining projections, animation and dance, Lee creates visually interactive soundscapes that call attention to the lost matriarchal cultures and shamanistic rituals of Korea, specifically of Jeju Island, her birthplace.

Shamanism and nature-based rituals were banned during Japan’s occupation of Korea and have largely been forgotten by the current generation. Lee says the creative objective of her work is to “revive the mythology and the goddesses of my culture. Bring back the forgotten part of our lives. How we can bring mythology, ritual and history into the performance that makes the performance itself a ritual.”

Lee balances her performance life with work as an educator. With a background in healing and expressive arts, Lee believes that music and dance are fundamental parts of the human experience and can create positive change in the world. She says:

When we are born, the first thing we do is we breathe and we cry, or make a vocal sound. You are born a singer. When a baby is born, they immediately start moving. You are born a dancer. I believe that everyone has that ability and capacity to dance, express themselves through the body, and also through their voice and this is the time people need to express themselves more and speak up.

On April 26, Lee performed her latest work at Roy and Edna Disney/CalArts Theater (REDCAT) titled Mu/巫, which translates to “shaman.” According to REDCAT, “Lee uses wearable sensors and controllers to direct an immersive sound and video environment through her mesmerizing physical performance, which combines movement, chanting and percussion.”

Lee explains, “The shaman is the connector. I’m creating eight goddesses to connect to the land and people and spirit. We have so many problems on this planet; our mother earth is dying. We’re going to destroy her. That is a fact. This project seeks to raise awareness of this situation, and to inspire people to try and slow that process down, and to not give up on ourselves or the ecology of the planet.”