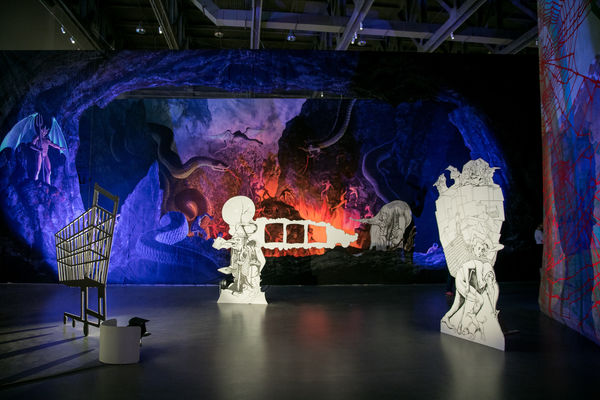 Paul and Maurice Marciano, co-founders of clothing retail brand Guess Jeans, transformed the Scottish Rite Masonic Temple on Wilshire Boulevard in Windsor Square into Los Angeles’ newest contemporary art space. The ornate marble and travertine building, which was designed in 1961 by architect and artist Millard Sheets (Chouinard BFA 29) became too expensive for the fraternal order to maintain, and after an eighteen year vacancy period, was sold to the Marciano Art Foundation in July 2013. The space recently opened to the public this spring.

TODAY ???? #MAF is releasing more tickets. If you haven't yet made your free reservation, visit us at MarcianoArtFoundation.org. #LinkInBio | ???? via @Curbed and by @ElizabethDaniels01

One of the foundation’s inaugural exhibitions, The Relic Room: Masonic Objects, showcases artifacts and paraphernalia such as photographs, documents, stage sets, backdrops, costumes, robes, wigs and regalia that were discovered in the building during renovation.

These found masonic objects were the starting point for Jim Shaw‘s (Art MFA 78) exhibition, The Wig Museum. The vision for the Marciano Art Foundation’s inauguration could not be more in-line with Shaw’s aesthetic, whose prolific artistic practice in painting, drawing and sculpture is marked by his interest in Western esotericism and found objects and images. Overarching themes in The Wig Museum explore religious allegory, U.S. politics, and the country’s oppressive consumer culture, all filtered through Shaw’s singular sensibility and sense of humor.

The titular feature of the exhibit, The Wig Museum, displays a range of colorful and abstract wigs, and is, according to the artist, a metaphor for the waning power of wig wearing figures of authority. On display in the second-half of Shaw’s exhibition are dystopian scenes made with cutouts, mural-sized paintings by Shaw and theatrical masonic backdrops found in the temple’s rafters.

"I was trying to create a Boschian hellscape, and had a nice hellscape to work with” – #JimShaw tells @Curbed about his inaugural exhibition in the former Masonic theater. #TheWigMuseum is on view until September 17. | #MAF ???? by #BillyFarrell for @bfa | ???? ???? ????

The distinctly Hieronymous Bosch-style scene depicts Hell with enormous serpents and nudes in various states of torture. Next to the hellscape is an ominous shadow of an oversized shopping cart superimposed on a 1950’s nuclear, white family, as well as a wooden sign welcoming visitors to the “International House of Pain.”

Shaw’s The Wig Museum is on view through September 17. Admission is free but advance reservations are required. The permanent collection features art from the Marciano brothers’ personal collection of over 1,500 works many of which are by CalArts alumni, such as Untitled # 1-18, 20-31, 33-42 from Freeway Series by Catherine Opie (Art MFA 88), Dragon by Mark Bradford (Art BFA 95, MFA 97), and Kandor 18B by Mike Kelly (Art MFA 78).