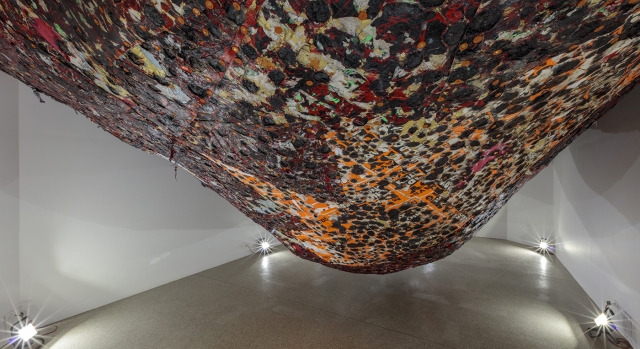 Artist, MacArthur “Genius” Grant award-winner and CalArts alumnus Mark Bradford (Art BFA 95, MFA 97) is representing the United States in the 2017 Venice Biennale (La Biennale di Venezia), the most prestigious international exhibition of contemporary visual art in the world. His multimedia exhibit, Tomorrow is Another Day, features abstract molded and painted forms spanning five galleries in the United States Pavilion and is on view at the Giardini in Venice through Nov. 26.

Tomorrow is Another Day is born out of Bradford’s longtime commitment to the inherently social nature of the material world we all inhabit. For Bradford, abstraction is not opposed to content; it embodies it. His selection of ordinary materials represents the hair salon, Home Depot, and the streets of Los Angeles—both the culture industry and the grey economy. Bradford renews the traditions of abstract and materialist painting, demonstrating that freedom from socially prescribed representation is profoundly meaningful in the hands of a black artist.

In a New York Times article, Bradford speaks about the crisis of how best to represent the United States when he feels that his government no longer represents him. “I felt like a lot of the progress we’ve made to be inclusive, to make sure young little trans kids are safe, was gone in the blink of an eye,” he said. “Making this body of work became very, very emotional for me. I felt I was making it in a house that was burning.”

He resolved to “keep it hot, keep it urgent,” and the result is a multilayered narrative that progresses through the building’s spaces and reflects the artist’s belief in the capacity of art to expose contradictory histories and inspire action in the present day.

Visitors entering the pavilion are greeted by Spoiled Foot, a massive, bulbous, red and black sculpture suspended from the ceiling. Its size forces visitors to hug the periphery of the room until they get to the next gallery, where the aptly named sculpture Medusa awaits. Medusa is made of black paper rolls as thick as fire hoses that have been soaked, wrung and shaped into coils that recall the mythical creature’s hair. Three new paintings, each named for a Siren, hang on the walls. 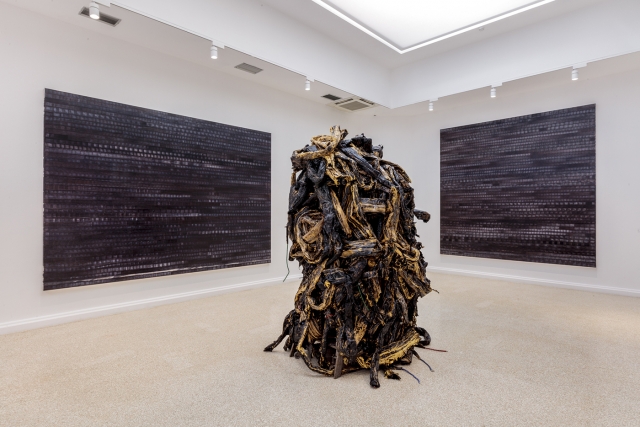 “I like the tension between the dark paintings, where everything is underneath, and the Medusa sculpture, this externalized rage,” Bradford tells The New York Times.

Past the rotunda are three large mixed-medium canvasses in predominantly red, blue and beige-white hues. The canvasses, evoking cellular forms, were made without brushes, but instead used the sandblasted-and-slashed layers of paper, glue and industrial paint.

The final room features Niagara, a three-minute video featuring a young black man walking the streets of South Central Los Angeles, the sway of his hips reminiscent of Marilyn Monroe’s own hip-swaying in the 1953 film of the same name.

More from an Art in America review:

Midway through Niagara, its adolescent protagonist encounters a mound of debris strewn across the sidewalk. Neglecting—or refusing—to break his stride, he instead makes a small leap to the other side, landing on one foot and swinging his arms triumphantly before continuing. The video transforms this seemingly minor, quotidian movement into something balletic and luxurious. It is a moment that, like much of Bradford’s work, conjures the coercive mimeticism that places restrictive representational demands upon racially and sexually minoritized artists; it is suffused with the sort of insolent joy that comes from discovering ways of inhabiting a body on one’s own terms. 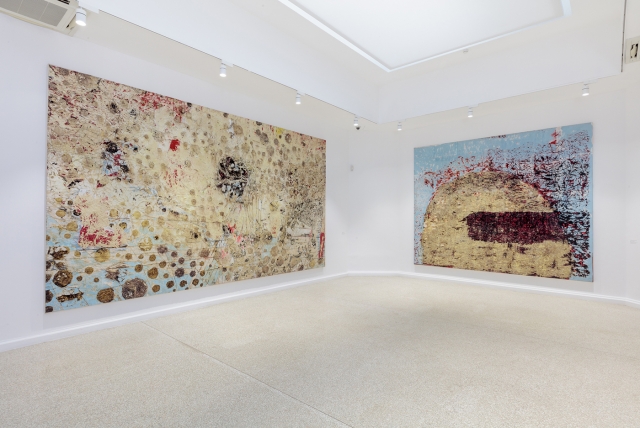 Mark Bradford: Tomorrow is Another Day