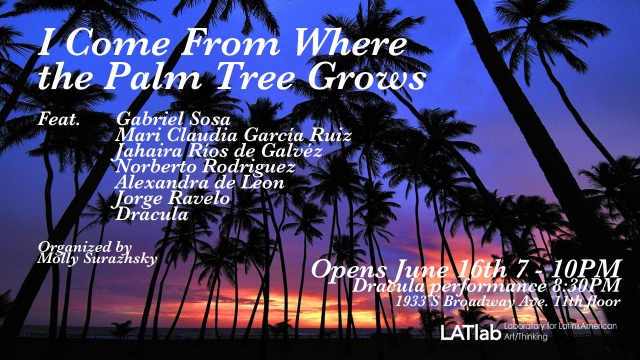 Promotional material for ‘I Come From Where the Palm Tree Grows.’

The show is about love existing, fighting, surviving and prevailing through the systems that enrage and attempt to control bodies in time, space and place. Surazhsky selected works by artists who have strong connections to Cuba. In March, Surazhsky took part in El Acercamiento/The Approach, an on-site collaborative art exhibition in Havana, Cuba, which was designed by CalArts School of Theater faculty Evelyn Serrano. It was through this experience that Surazhsky met Sosa and Garcia.

De Leon’s interactive installation, Raft Theory/ Reef Hyperreal is created in the form of a raft, on which visitors may sit and watch a video montage of the Caribbean as depicted by Hollywood. Her installation also includes drawings from her continuing on-site engagement with a cluster of panopticon prisons on the Isla de Juventud that are off the southern coast of Cuba.

Ravelo’s video work, Guajiro, which translates as: peasant worker, sugarcane worker, etc., follows Ravelo’s father working as a maintenance repairman in chain restaurants such as Taco Bell. The central song in Guajiro, and the inspiration behind the title of the show, I Come From Where the Palm Tree Grows, is “Guantanamera” with lyrics by the Cuban poet José Martí.

The opening reception is Friday, June 16th with a performance by Dracula (Eli Oviedo, Dorys Bello, and Juan Campuzano), a talented band from Miami performing dark Cuban folk music. I Come From Where the Palm Tree Grows//De Donde Crece la Palma is free and will be up until July 8 with public visiting hours on Wednesdays.

LATlab is a self-organized educational and critical creative platform that seeks to investigate the particularities of conceptualism in Latin American Art, inquiring into alternative articulations of art and politics that emerged from the Latin American experience. Aiming for a radical cartography that traces poles of resistance and experimentation beyond the hegemonic U.S./Eurocentric map, it is geared to everyone interested in alternative narratives of Art History, decolonial perspectives and modes of resistance in art making.