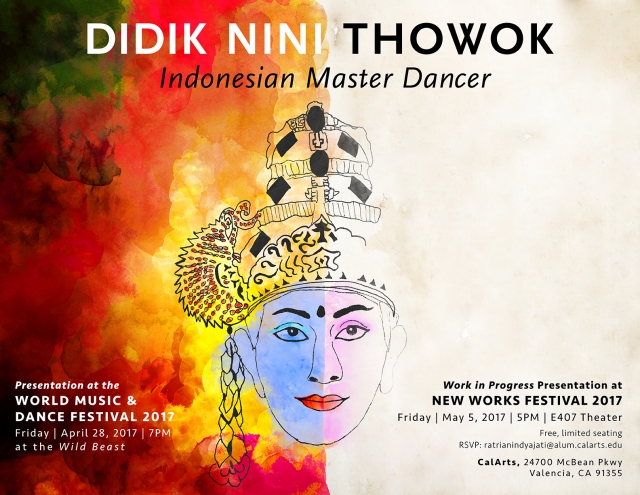 Didik Nini Thowok, master dancer from Yogyakarta, Indonesia, held a 2-week artist residency at CalArts from April 24 to May 5. Didik engaged in several academic activities on campus that included lecture-demonstrations, as well as working with students individually and in groups. As a culmination of his work with the CalArts community, Didik presented a Javanese dance duet with eminent choreographer Maria Darmaningsih during the school’s annual World Music and Dance Festival. He also participated in a work-in-progress presentation of Ratri Anindyajati’s (Theater MFA 16) thesis project, which was part of the CalArts New Works Festival.

Anindyajati’s lab workshop explored the theme of gender fluidity in an excerpt from the epic story The Mahabharata. The excerpt focused on Shikhandi, a cross-gender character in the tale.

Anindyajati says, “Didik is the perfect artist for what I wanted to do with my piece, because he has such a deep knowledge of a variety of Indonesian traditions and he’s a generous spirit.”

Thowok says that introducing comedic elements into his art has made cross-gender dancing more socially acceptable in his country. “Cross-gender already existed from ancient times. We can find this kind of tradition before Hinduism and Buddhism came to Indonesia. In the royal courts of Java, women were not allowed to perform for the king, so men danced the female roles. But today, I have found that if I perform as female, as a woman, I must do so in the frame of comedy for society to accept it.”

At a time when Muslim culture is dangerously misunderstood and highly politicized, it is critical to call attention to the diverse and multifaceted culture of Indonesia, which has the largest Muslim population in the world. Indonesia has centuries of tradition as a center of diverse and abundant creative and cultural expression. Although Islam has had a strong influence during the last few decades, Indonesia, an archipelago that consists of more than 13,000 islands has been a trading harbor for centuries. Various world religions have had deep impact in the country’s civic life and its wealth of arts and culture. Indonesia is a home to hybrid creative artists and contemporary arts production deeply inspired by its traditional arts practices.

CalArts has a long history of collaboration with Indonesian artists and performers. The Gamelan Ensemble has been filling the hallways with music for over 45 years, and today students can receive an MFA in Balinese and Javanese Music and Dance through The Herb Alpert School of Music.

Anindyajati’s background is in international relations and independent arts management. “When I came to CalArts, I realized that it was the perfect place to create a sustainable model of collaboration between Indonesia and the school,” she says. “I’ve always wanted to be an international bridge for Indonesian contemporary artists abroad, especially to the western world.”