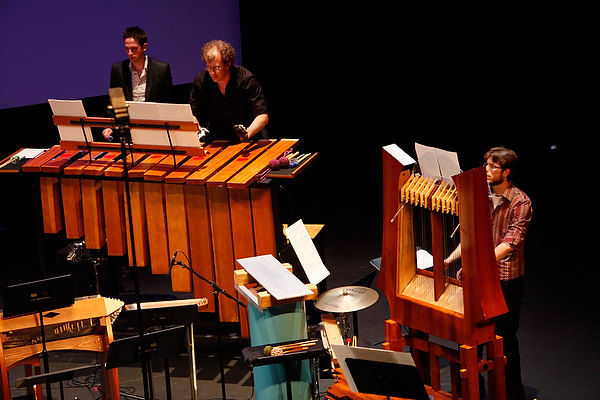 This weekend’s musical lineup at the Roy and Edna Disney/CalArts Theater (REDCAT), CalArts’ downtown Los Angeles performance space, features the Grammy award winning ensemble Partch. The musicians specialize in the music and instruments of American composer Harry Partch (1901-1974), who is known for working outside the musical structure of standard Western tuning, and for integrating elements of theater into his compositions.

On Friday and Saturday (June 23-24), Partch (the ensemble) will be performing Partch’s score for the 1958 arthouse film, Windsong by Madeline Tourtelot. The film is loosely based on the Greek mythological story about Apollo’s amorous pursuit of the virgin Daphne. Partch’s thrilling, atmospheric film score for Windsong is some of the composer’s most memorable mid-century music, and has not been played in Los Angeles until now. The ensemble will also be performing three more works by Partch: Twelve Intrusions, Dark Brother, Sonata Dementia, and, in memory of Partch’s close friend Lou Harrison, Suite for Violoncello & Harp by Harrison.

One of the highlights of the concert is being able to experience the composer’s incredible custom-built instruments, such as the Chromelodeon, Kithara, Cloud Chamber Bowls, BooBams, HypoBass and Adapted Guitars, live.