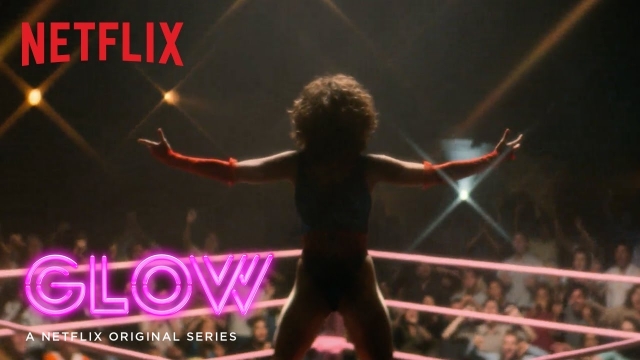 Above: Official trailer for ‘GLOW.’

Based on the short-lived TV franchise Gorgeous Ladies of Wrestling, GLOW follows Ruth (Brie), a serious-minded actor who finds herself unable to find roles beyond being a secretary. She answers a casting call for “unconventional women” put out by B-movie sci-fi director Sam (played by Marc Maron) which turns out to be a show seeking to cash in on the decade’s wrestlemania by showcasing women catfighting.

On top of its female majority casting (14 of the ensemble cast are female), GLOW also boasts of a female-dominated crew. Its creators are Liz Flahive and Carly Mensch of Nurse Jackie and its executive producer is Jenji Kohan of Orange is the New Black and Weeds fame.

A review from The Atlantic calls GLOW a “total delight” and “smart and subversive underneath the glitter.” The same review calls Brie “endearing in her role.”

The New York Times calls it “a high-flying leap off the top rope, a summer treat with spandex armor and a pulsating neon heart.”

More from the review:

GLOW is its own thing. It’s nostalgic, but it’s more than the sum of its soundtrack and hair spray. Its ratty mid-80s Los Angeles of motels and skate punks feels specific and lived in. Like last summer’s Netflix breakout, Stranger Things, GLOW is a hulking creature sewn together from pop-cultural scraps, but when it steps into the ring, it reveals itself as a true original.

GLOW is streaming on Netflix.

Above: ‘GLOW’ featurette from Netflix.