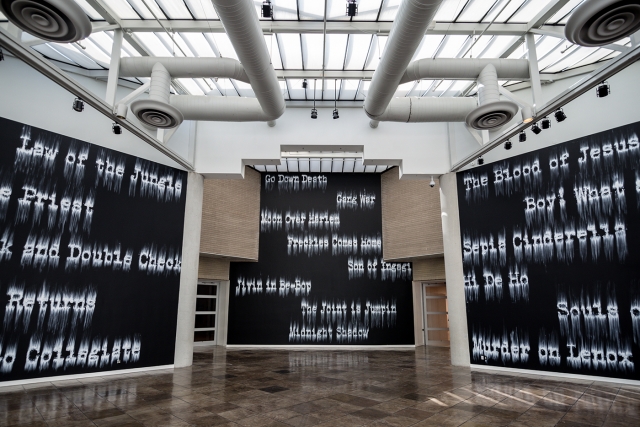 Through July 2018, the California African American Museum (CAAM) in Los Angeles’ Exposition Park presents Fade to Black, the first LA exhibit by artist and CalArts alumnus Gary Simmons (Art MFA 90), and one of his largest installations to date.

For more than two decades, Simmons has honed his “erasure technique,” a method of hand-smudging and sculpting wet paint to create the shimmery effect of partly erased chalk. For Fade to Black, he uses the technique to make a statement about pop culture as well as issues of race, class and the fragmented, fleeting nature of memory.

In the CAAM lobby, Simmons has installed five murals, their jet-black chalkboard surfaces bearing the hand-drawn titles of silent and early talkie films, such as The Birth of a Nation, Hi De Ho and Check and Double Check. The white text is blurry and fading around the edges, as if just on the brink of erasure.

“A lot of these film titles—and actors and actresses—have sort of disappeared through history,” Simmons tells The Los Angeles Times. “I wanted to recall some of them because I think they’re the foundation of early film. They’re an important part of Hollywood history that have faded away in certain ways, and it’s nice to have them back here.”

CAAM curator Naima J. Keith says, “Fade to Black provides a nuanced history of black representation in motion pictures from the early to mid-20th century. History’s subjective bent is also a strong theme within Gary’s work, and the simple nature of chalk lends itself to his artistic concerns —especially in its suggestion of basic communication, the human hand, education systems and of easily erasable or altered information.”