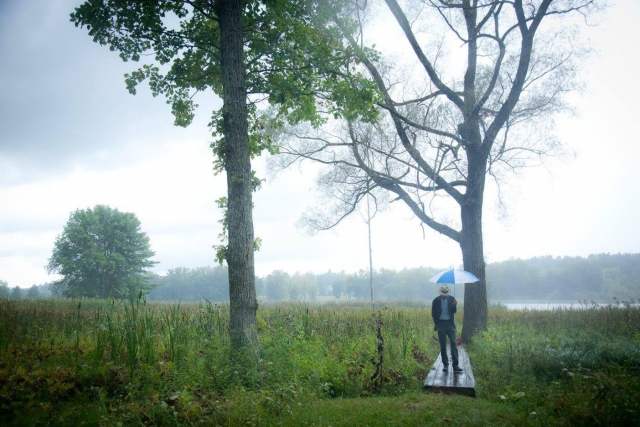 A listening party with Adams takes place before the official start of the festival on Wednesday evening at the SFJAZZ center. On Thursday, July 27, JACK Quartet performs The Wind in High Places (2011), Untouched (2015), Canticles of the Sky (2015) and Dream of the Canyon Wren (2013), a work Adams composed specifically for the Quartet.

The following evening (Friday), the JACK Quartet performs the world premiere of Everything that Rises. Adams describes his piece in the San Francisco Classical Voice: “‘It’s the harmonic series superimposed on itself, going up the spiral, and as you get higher and higher, the intervals get smaller and smaller, so they get more dissonant; but of course they’re acoustically perfect dissonances, so they don’t have that edgy growl.'”

There are two events on Saturday: Adams’ Inuksuit, a piece meant to be performed outdoors with up to 99 percussionists, and Veils and Vespers, an electronic sound installation at Grace Cathedral. The 2015 GRAMMY-winning piece, Inuksuit, has been performed all over the world and is named for the iconic human-shaped stone monuments erected by indigenous peoples of the Arctic to mark important locations. The San Francisco Chronicle describes the piece as a “vivid blend of energy and stillness.”

On Saturday, Inuksuit will be directed by percussionist and composer Doug Perkins, and performed at Lands End, a scenic park overlooking the Pacific Ocean. The piece is intended to be performed outdoors so sounds in the natural environment become a part of the musical experience. Also, audiences are encouraged to move within the space to create multiple perceptions of the musical piece. Inuksuit starts at 1 pm and is free to the public.

Veils and Vespers is also intended to be heard by listeners moving through the installation environment. The electro-acoustic soundscape features four sections that unfold over a six-hour period in which listeners are allowed to freely enter and exit Grace cathedral.

To wrap up the festival on Sunday evening, Perkins and renowned pianist Adam Marks are performing solo and duo compositions. The first half of the program includes performances of the piano pieces Nunataks and Red Arc/Blue Veil. The second half focuses on Adams’ expansive solo percussion piece Ilimaq, which means “spirit journeys” in the native Alaskan Inupiaq language.

More information about the festival and tickets can be found on the SFJAZZ website.

Listen to the Pulitzer-Prize winning piece Become Ocean recorded by the Seattle Symphony below: