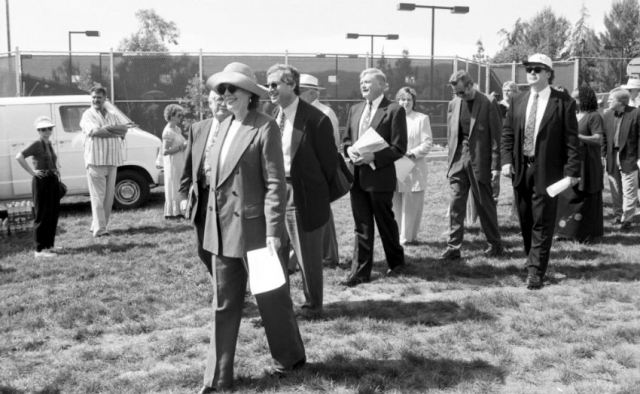 Ed.’s note: We were saddened to hear of the passing of Provost Emeritus Beverly O’Neill, who worked at CalArts from 1986-2002. We asked her friend Tom Leeser, Program Director of the Art and Technology Program in the  School of Art and the Director of the Center for Integrated Media at CalArts, to write a few words about O’Neill. His touching remembrance follows.

After a week in a Maine cabin and being off the grid and without access to the Internet, I came home to my inbox, only to find that my friend, colleague, teacher and mentor Beverly O’Neill had passed.

Knowing of her illness and her courageous struggle for quite sometime did little to alleviate the enormous feeling of loss.

During her 16 years as Provost, Beverly guided CalArts through numerous crises, accreditation reviews, a presidential search and even an earthquake. She was instrumental in developing innovative and groundbreaking initiatives such as the Center for Integrated Media. In many ways I feel that CalArts and its unique mission survives to this day because of the effort and energy that Beverly so selflessly and generously provided.

In the CalArts Magazine #19, published in May 2016, then-President Steven D. Lavine acknowledged Beverly’s expertise and talent. Upon his arrival to CalArts, he stated that he depended on her “steady guidance” since she knew “the strengths and weaknesses of CalArts.”

Beverly not only knew CalArts, she lived it. She brought to CalArts an extensive knowledge of the local Los Angeles art world. Her knowledge was that of a participant, working as a writer, educator, filmmaker and curator. She was one of the founding members of the Los Angeles Independent Film Oasis, a collective of artists and filmmakers dedicated to showing experimental film in a city dominated by the Hollywood movie industry.  She and her husband Pat O’Neill were instrumental in creating and promoting an alternative space for filmmakers interested in establishing a regional center for experimental filmmaking in Los Angeles. After a meeting of the Oasis members, she turned to me and said, “Don’t forget the importance of the collective.”

This is how Beverly O’Neill thought and lived. She saw life as a network of interconnected relationships guided by a powerful sense of justice and compassion.

In “Dreamworks,” a journal from the 1980s edited by her friend and colleague Marsha Kinder, Beverly recounts a dream she had of Margaret Mead. In this dream, she tells Mead that she is “involved in art.” Mead responds, “If you are involved in art you must care about the future.” Beverly cared greatly about all of our futures, and it will be hard for me to imagine a future without her.