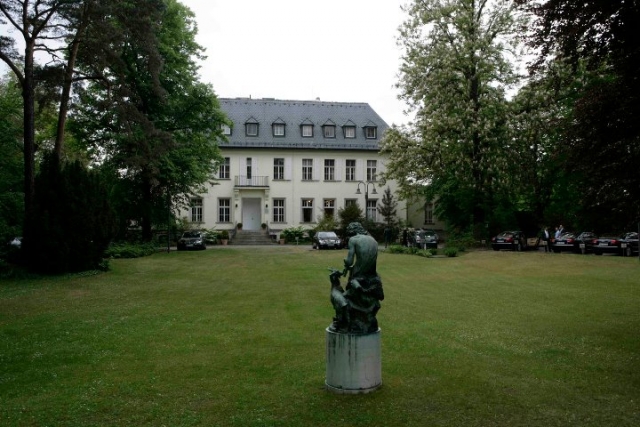 Artist and composer Raven Chacon (Music MFA 04) is a Spring 2018 recipient of the Berlin Prize from the American Academy in Berlin. The prestigious semester-long fellowship and residency in Berlin supports U.S. artists, scholars and writers working on individual and collaborative projects between local German artists and institutions. To encourage public engagement, the Academy hosts readings, lectures and performances for Berlin Prize Fellows throughout Germany.

From the Academy’s press release:

Raven Chacon will begin the work of composing a series of collaborative works for Indigenous woman musicians. His work during the residency will also include writings on the role of sound at the Standing Rock camp and other recent and current protest demonstrations. In addition to this work, Chacon will also be developing new sound installations and performance systems.

Chacon hails from the Navajo Nation and belongs to the politically conscious Indigenous art collective, Postcommodity.  The collective recently created a piece titled Blind/Curtain, which consists of hyper-directional speakers emitting pink noise installed in the entrance of the documenta 14 exhibition in Kassel, Germany. Blind/Curtain acts as a threshold that reflects upon and examines the roles of manmade borders.

Chacon’s practice also involves an educational outreach component. He worked as a composer-in-residence for the Native American Composer Apprentice Project (NACAP), which provides musical education to hundreds of American Indian high school students living on reservations in the Southwest U.S. In 2011, NACAP received the National Arts and Humanities Youth Program Award from The President’s Committee on the Arts and the Humanities.

Postcommodity – Blind/Curtain (2017) #documenta14 The purpose of this work is to offer a gift and blessing to the visitors of documenta14, from Postcommodity. Blind / Curtain will act as a threshold for audiences to cleanse themselves of the outside world, and prepare their hearts, minds and spirits for engaging the transformative experience of documenta14. In this regard, Blind / Curtain is a physical and conceptual threshold for demarcating outside and inside, and acknowledging and reifying the spaces and artworks of documenta14, as well as the spaces and contexts between. Simultaneously, Blind / Curtain is aware of itself as a node of power — it is a determiner of space — a border. It is a membrane constructed of pink noise and submerged poems. Blind / Curtain is a human dilemma that contains secrets, provides access, creates the illusion of privacy (prevents access), provokes surveillance, and embodies love.