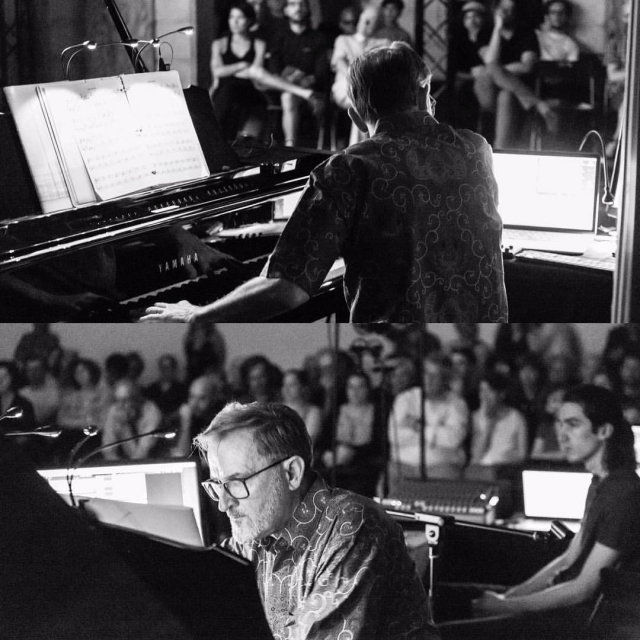 David Rosenboom, Dean of The Herb Alpert School of Music at CalArts, has had busy summer traveling around the world to perform and lecture.

On July 14, he premiered Nothingness is Unstable, a 3D sound work made specifically for the New York Electronic Arts Festival in Brooklyn. Rosenboom performed with the Geluso 3D Sound Object, a directional speaker system that reproduces complex sound radiation.

From the performance notes:

David Rosenboom’s Nothingness is Unstable interprets his own drawing series Natural Scores as well as his harmonic cycle system Earth Encomium to explore how “Nothingness usually collapses into something-ness” in live electronic performance. The work features sounds collected in Indonesia and the U.S. articulated by large banks of complex digital resonator circuits, shaped by performing actions with analog acoustic sources. These sounds are diffused into space with the unique Geluso 3D Sound Object to create an immersive musical wrapping. Into this sonic environment, Rosenboom also blends excerpts from his interactive piece “The Experiment,” which was written for Hopscotch, a mobile opera for 24 cars produced by The Industry in Los Angeles in 2015. In this scene, voices move around in 3D sound space while responding (via brainwaves) to questions posed by an anxious investigator attempting to determine if Heaven and Hell are merely features of the mind.

Following his premiere at the New York Electronic Arts Festival, Rosenboom collaborated with the Center for Experiments at Teatro Colón on the curriculum for a week-long seminar in Argentina titled, Is New Opera Possible? Rosenboom, as well as School of Music faculty Marc Lowenstein and Doctor of Musical Arts (DMA) student Fahad Siadat lectured and led workshops. The seminar, which took place from July 31 to Aug. 6, was organized by Festival Nueva Ópera Buenos Aires, CETC (Center for Experiments at Teatro Colón) and Fundación Williams in collaboration with CalArts, Universidad Nacional de San Martín and other organizations.

In September, Rosenboom travels to Beijing, China, for a global forum with leaders of higher music institutions. The forum, held at the China Conservatory of Music, addresses the role of education in the rapidly changing artistic and professional music world. Rosenboom’s presentation is titled: Collapsing Distinctions—The Performer-Composer as Metaphor for Transcultural and Transmodern Music Education in The Herb Alpert School of Music at California Institute of the Arts.