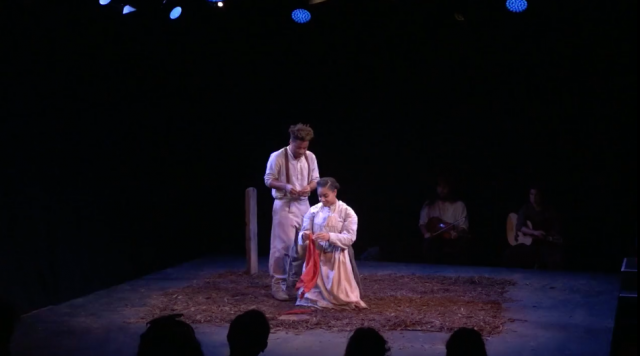 On Aug. 28, the 2017 Edinburgh Festival Fringe–the largest arts festival in the world–drew its 70th annual celebration to a close. As the curtain fell on 3,398 shows in 300 venues across the capital city of Scotland, the CalArts Festival Theater and its three productions drew acclaim from international theater reviewers.

Of Gunshot Medley, which explores America’s deep-seated racial tensions through the story of three slaves haunting a North Carolina graveyard, Keith Mckenna of British Theatre Guide wrote, “This is a remarkable production that combines a sharp poetic text with a challenging political vision, an imaginative sound design and powerful acting. It is one of the finest shows I have seen.”

Love Gasoline!, which takes the audience inside the imagination of Marcel Duchamp, received a four-star review from Broadway Baby, inspiring reviewer Frodo Allan to ask, “Are we watching the art or are we the art?”

In her review of The End, The End, The End…–a theatrical collage performance of the exile experience in America–Eve Allin from the Network of Independent Critics raved, “This show asks what America is via a multimedia whirlwind. I have never seen a piece of art which so encapsulates our modern condition, in particular, the American modern condition.”

Marking CalArts’ 14th year partnering with the Royal Welsh College of Music and Drama to stage plays from emerging Welsh and California artists, this year’s productions ran Aug. 5 through 26 at Venue 13, “the best little venue at the Fringe.”

Watch the video posted above for the CalArts Festival Theater experience.