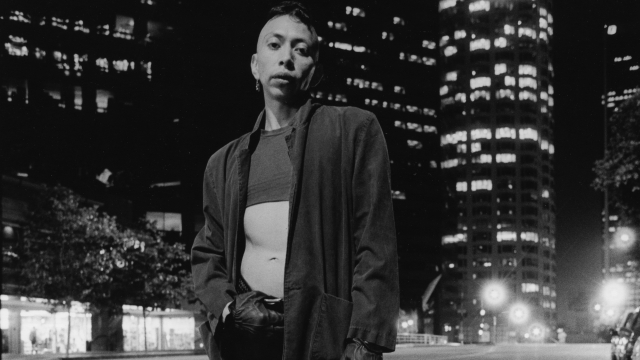 7/19/18 update: In conjunction with CalArts faculty Harry Gamboa Jr.’s retrospective at The Autry, the artist will be at the museum in person on Saturday, July 21 at 11 am. For the program, Reflections on Chicano Male Unbonded, Gamboa Jr. will be joined by L.A.-based contemporary artist and CalArts alum Eve LaFountain (Turtle Mountain Chippewa) for an in-gallery conversation. LaFountain (Film/Video, Art MFA 14) was a student of Gamboa Jr. at CalArts. They’ll discuss the exhibition as well as the mentor-mentee relationship and how Gamboa Jr.’s work has influenced LaFountain’s own art practice.

As Gamboa told The Autry, “I’ve heard people comment, just from looking at the pictures, that they are gang members. But then they get closer, read the descriptions and discover that the ‘gang members’ are lawyers, Ph.Ds, artists and novelists. In these days, when political talk includes discussion about the mass deportation of Mexicans and Mexican males in particular are negatively portrayed, this work stands out.”

Gamboa first hit the Los Angeles art scene as an activist and member of the arts collective Asco, creating work to combat the invisibility, imbalance of power and injustices experienced by Chicanos and Mexican Americans.

Opening Sept. 16, the exhibition is presented in conjunction with the Autry’s LA RAZA photography exhibition and as part of Pacific Standard Time: LA/LA, the Getty’s effort to unite 70 cultural institutions across Southern California in an exploration of Latin American and Latino art in Los Angeles.

In addition to Harry Gamboa Jr.: Chicano Male Unbonded, Gamboa’s work can be seen in several other museums and galleries this fall. Among them: