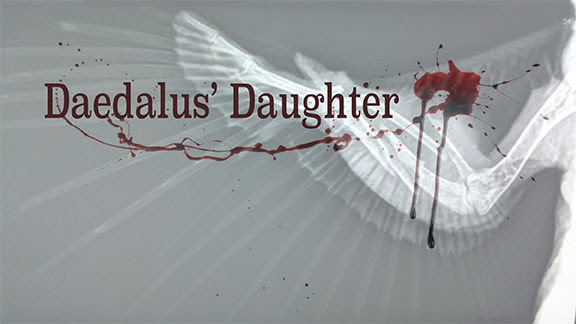 ‘Daedalus’ Daughter’ has its premiere at the Bootleg Theater | Photo courtesy of the artist.

CalArts faculty and choreographer Rosanna Gamson of Rosanna Gamson/World Wide serves as the Creative Producer and Dramaturge of Daedalus’ Daughter, a new dance theater piece created by writer-director-performer Carol Katz. The production opens on Thursday (Sept. 21), at the Bootleg Theater in Los Angeles, and continues for six additional shows over the next two weeks.

Daedalus’ Daughter is a twist on the Greek myth of Icarus told from the point of view of Icarus’ sister, a character Katz created in order to tell the story of a family that unravels its long-kept secret history of mental illness and suicide. Icarus’ sister, who ultimately finds redemption and healing by speaking her truth, is an embodied metaphor for Katz’s own personal struggle with bipolar disorder. The synopsis on the production website notes that Daedalus’ Daughter is “told through movement and text, both poetic and prosaic, this piece is a surreal, dream like journey through myth and memory.”