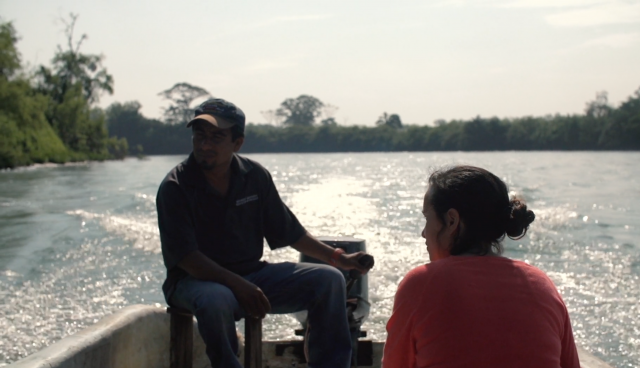 And We Stood Still–Kickstarter Video by Ilana Coleman | Screen shot photo from Vimeo.

Mu’min is currently in the postproduction phase of her first feature length film, Jinn, which received a wide range of support from numerous independent film organizations including the San Francisco Film Society, the Sundance Institute and the Islamic Scholarship Fund.

Jinn focuses on Summer (Zoe Renee), a 17-year-old black girl who begins questioning her identity after her mother converts to Islam. At school, Summer develops a crush on Tahir (Kelvin Harrison Jr.), a fellow classmate who also happens to be Muslim. Jinn will be out on the festival circuit next year.

Mu’min’s stories often draw on her childhood background. While growing up, she spent time between her mother’s household, which was nonreligious, and her Muslim father’s religious home environment. In Filmmaker magazine, she says, “So, my scripts and films usually center on black women and girls straddling dual worlds and at major turning points related to sexuality, family, identity or death.”

Coleman is a Mexican American filmmaker who recently completed her CalArts’ thesis film, And We Stood Still. Set in Mexico, the film is about a mother in search of her missing daughter. It explores recurring disappearances that have been a national problem in Mexico, especially during the height of the Dirty Wars (from the 1960s-80s).

Filmmaker on And We Stood Still:

A slow-cinema-style trip to a remote part of the jungle [that] begins as a straightforward reconnoitering quest but becomes more surreal as the 24-minute short proceeds: A naked man robbed by police appears from the trees, visions of soldiers from the present or past appear and the narrative dissolves into a compellingly ambiguous thicket.

Coleman grew up in Mexico City and before starting production, she returned home to interview mothers of missing children. The interviews deepened Coleman’s understanding of Mexico’s history of forced disappearances and shaped the overall emotional landscape of the film. Her next project is a film essay that presents these interviews alongside fictional sequences.