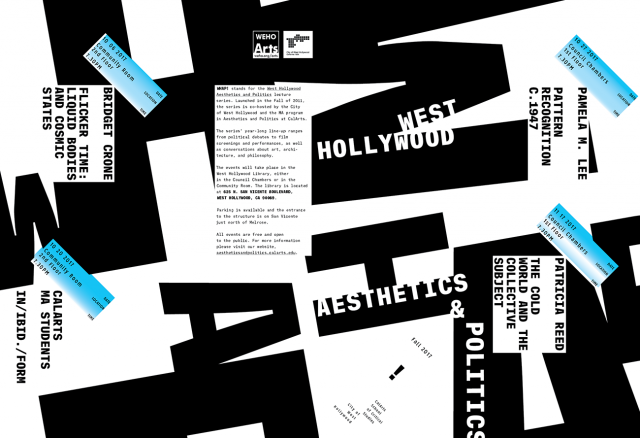 Preview this season’s lineup below:

in/ibid./form
On Oct. 20, the MA Program of Aesthetics and Politics showcases students’ most innovative work from this past year, as well as ongoing research. This event offers a number of unique and compelling approaches to the questions of politics and art in the contemporary moment.

Pattern Recognition c. 1947
On Oct. 27, Stanford University professor and author Pamela M. Lee will give a talk about her new work, which examines the processes of globalization through the lens of contemporary art—both as object and as agent. Lee analyzes key elements of the dense history of the Cold War and the increasing intensity of visual culture.

Her talk will investigate some of the forces at work in the transition to a new era, one driven in part by a cadre of thinkers charged with conceptualizing the future of that new world, and how their work dramatically influenced art and aesthetics.

The Cold World and the Collective Subject
On Nov. 17, Berlin-based artist, writer and designer Patricia Reed discusses how artists, activists and citizens in general can engage with the increasing complexity of the global system, and the veritable explosion of a new type of capitalism with its production of data, control and rampant inequities.

Reed analyzes this emergent configuration from a perspective of “optimist realism,” proposing the dynamics of a perspectival shift, utilizing the forces of alienation to construct innovative models of collective agency generated by the interface of the concretely situated and the abstractly conceptual. Her talk investigates some of these issues with regard to the advent of a/the Cold World.