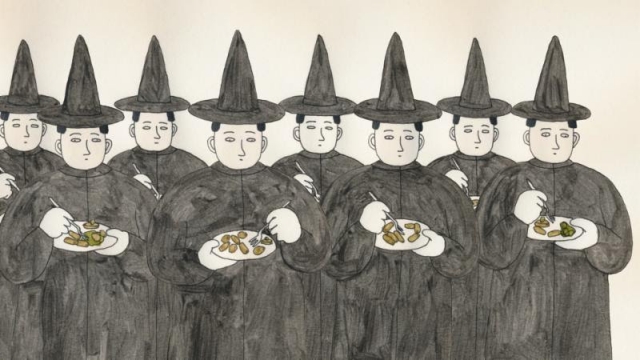 The Eyeworks Animation Festival is at REDCAT on Saturday | Image: Still from ‘Rabbit’s Blood’ (2017) by Sarina Nihei

On Saturday (Oct. 21), the Eyeworks Festival of Experimental Animation comes to REDCAT with its 2017 festival selections.

The festival focuses on works that blend classical animation, avant-garde cinema and alternative comics. More than two dozen short films will be screened in two programs of both classic and contemporary work from filmmakers such as Pat O’Neill, Barbara Hammer, Jan Svankmajer, Jaakko Pallasvuo, Annapurna Kumar and Sarina Nihei.

Following the two shorts programs, Eyeworks then screens selected new and recent films of special guest Jacolby Satterwhite, who uses performance and 3D animation to engage issues of technology, fantasy, the body, queer culture, the archive and his own personal and family history. His work has been shown at MOMA PS1, Whitechapel Gallery, the Smithsonian, the 2014 Whitney Biennial, and he was given a United States Artists Fellowship in 2016.

Satterwhite participates in a moderated discussion and an audience Q&A following his screening program at REDCAT.

Earlier this year at the San Francisco Museum of Modern Art, Satterwhite released a full-length visual album directly inspired by his mother, the artist Patricia Satterwhite. In an Artspace review of the performance piece and virtual projection, author Amelia Ames describes the visceral and personal nature of Satterwhite’s latest work:

Satterwhite also roots his future-orientated practice in past personal pain. Satterwhite created his new soundtrack (debuted at the performance)—a synthesized blend of electronic house noise and deconstructed club music— by sourcing a cappella albums recorded in the ’90s by his mother Patricia who, having been diagnosed with schizophrenia, recorded the vocals in a mental hospital and at home. Satterwhite described his recent album in terms of healing: Patricia listened to some of Satterwhite’s music before her death and it became a coping mechanism for her. The artist highlighted that just as music served as a coping means for his mother, his deconstructed club soundtrack recalls how acid house music functioned in a similar therapeutic manner for the LGBTQ community living through the AIDS crisis of the ’80s.

The Eyeworks Festival of Experimental Animation was founded in Chicago in 2010 by filmmakers Alexander Stewart and Lilli Carré. Since then, Eyeworks has presented screenings in Stockholm, Helsinki, Zagreb and Bologna, as part of the Animation Block Party, the Brooklyn Comics and Graphics Festival, the Chicago Alternative Comics Expo, at Dartmouth College, VCU, and of course, CalArts.

Watch the 2017 preview trailer from Eyeworks Festival on Vimeo.

– With additional reporting by Mackenzie Rasmus

The 2017 Eyeworks Festival of Experimental Animation