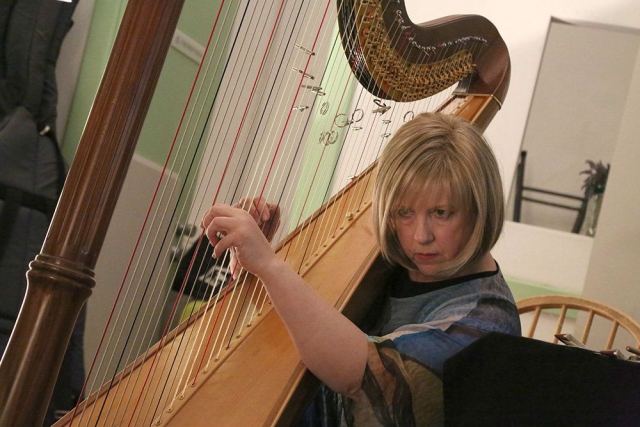 Anne LeBaron was the composer-in-residence for the Totally Huge New Music Festival in Perth, Australia. | Image: Courtesy of the artist

LeBaron served as international featured artist and composer-in-residence for the annual festival, which brings together musicians, critics, academics and others to “discuss the ideas that underline contemporary new music and sound art—the histories, methods, theories, approaches, techniques and dreams that make up the modern world of music and sound arts.”

As noted by Limelight Magazine, the festival also marked a rare opportunity for an overview of LeBaron’s “work as a composer, improvising harpist, teacher/workshop leader, writer, and lecturer.”

As part of her festival residency, on Friday, Oct. 20, LeBaron hosted a workshop detailing her approaches to musical improvisation; and last Friday (Oct. 27), she performed solo and ensemble works in collaboration with various Perth artists at the Subiaco Arts Centre. In addition, she worked with local artists to develop new work prior to the festival and presented university and public master classes, workshops and lectures.

“In a word, it’s essential for composers to be informed of what is going on in other art forms,” LeBaron told The West Australian about her participation in Totally Huge. “One of the most fantastic things about teaching at CalArts in the US is the multifaceted and often experimental interdisciplinary work that emerges from having other metiers taught under one roof … culminating in a broadening of knowledge and interests far beyond what a composer would be exposed to in a traditional conservatory setting.”

On Oct. 26, LeBaron also delivered the festival conference’s keynote speech, “Sonic Ventures in Post-Truth Surrealism: Raudelunas, the Rev. Fred Lane, and Huxley’s Last Trip,” which seeks to investigate the festival theme of composing and creating art in a post-truth era.

Widely recognized for her work in instrumental and electronic music as well as musical performance, LeBaron’s compositions have been performed around the world in venues from Italy to Mexico, Sweden to Kazakhstan, New York to Sydney. She has won numerous awards and prizes, including a Guggenheim Foundation Fellowship, the Alpert Award in the Arts, a Fulbright Full Fellowship, among others. Her current opera-in-progress, “Huxley’s Last Trip,” which she discussed at the festival, was awarded one of the first Discovery Grants from Opera America.

Post-festival, LeBaron continues to tour and present concerts, lectures and workshops in Christchurch, New Zealand, as well as Melbourne, Adelaide and Brisbane, Australia.