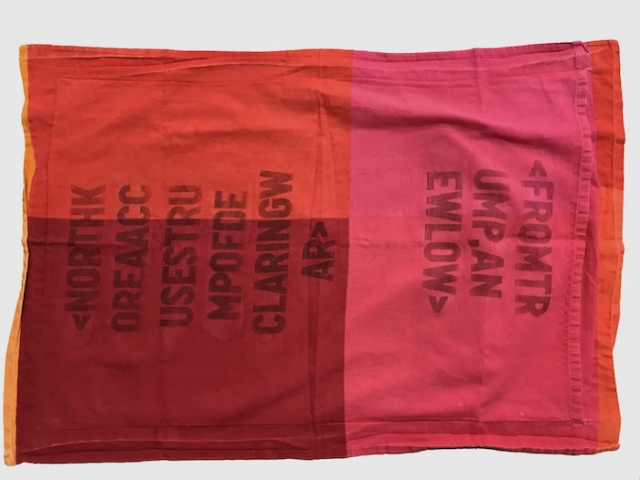 From ‘And Tossing And Turning And,’ 2017, Ink transfer on pillowcase. | Image: Courtesy of the artist and gallery

Mariángeles Soto-Díaz’s (Critical Studies MA 09) Unconfirmed Makeshift Museum (UMM), one of the exhibitions included in the Pacific Standard Time: LA/LA initiative, closes this weekend at Klowden Mann Gallery in Culver City, Calif., with a culminating performance of the exhibit’s companion event series. Conceived as an intervention in Irvine, Calif., UMM is described as a “flexible project space with a playful utopian sensibility.”

As a curatorial experiment intended to decentralize circulation of contemporary practices, UMM integrates the sensory, poetic, political and affective dimensions of the everyday. UMM’s mission is to provide a shifting creative platform for contemporary art through exhibitions and social practice in a community setting. UMM is infrapolitics and feminist, digging for the pleasure of doubt in the debris of heroic certainties. UMM is a space made visible by iteration over time, a way to simultaneously render and erase the lines dividing private and public, quotidian life and art, a house becoming art space and an art space welcoming neighbors. UMM is slow and shifting, kaleidoscopic and puzzling.

The artist’s encompassing project includes works from UMM’s Impermanent Collection, which features works that are made from 90 percent almost-dumped landfill materials and outmoded media collected from neighbors. There’s also a participatory project titled, And Tossing and Turning And, wherein materials were collected from UMM’s local neighborhood, with residents responding to the question, “What recent news headline has caused you to lose sleep?”

Soto-Díaz collected the responses to create an installation using bedsheets also from the neighborhood as a way to capture the affective dimension of the current political climate in the U.S.

On Saturday (Nov. 11) Los Angeles Road Concerts ends the UMM’s Untested Address event series with outdoor performances throughout the day (most are between 1-4 pm). For this concert, Radical Welcome (National and Washington Blvd.), more than two dozen artists/musicians perform or install site-specific works in various outdoor locations within walking distance of the intersection of National and Washington boulevards, near Klowden Mann.

An interactive map is available to help visitors navigate the area.