Carrie Mae Weems “The Shape of Things” at the Park Avenue Armory | Photo from Facebook.

Titled The Shape of Things, the day will grapple with the history of violence in America–a theme Weems has deeply explored in her most recent work–and invite participants to join Weems in a review of the nation’s current tumultuous political and social climate. Through poetry, spoken word, music, public readings, panels, intimate conversations, video screenings and performance, the event seeks to arrive at–in the words of philosopher Walter Benjamin–“a critique of violence that is adequate to our time.”

As Weems told ARTnews, “The work that I’ve been doing for a really long time in one way or another intersects with questions of power. I decided I wanted to explore that subject of the histories of violence more, and I really wanted to have a sense of what other artists, public thinkers, and other creative folk were thinking as we negotiate this history, in general, and this present moment, in particular.”

Considered one of the most influential American artists working today, Weems has been called “a superb image maker and a moral force, focused and irrepressible” by The New York Times. Steeped in African American history, her 30+ year body of work–primarily in photography and video, but also in mediums as diverse as fabric, verse and performance–examines the centuries-old struggle for racial equality, human rights and social inclusion in America. 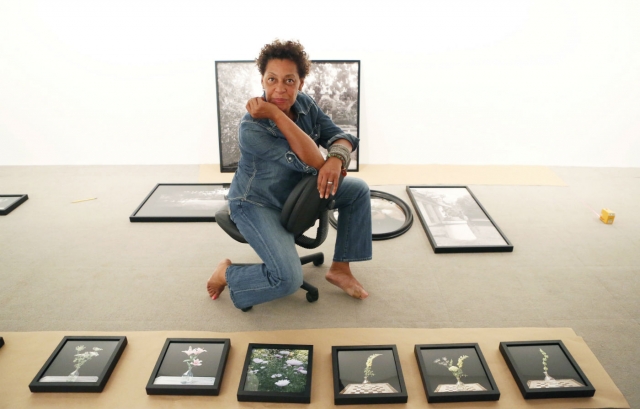 Born in Portland, Ore., in 1953, Weems had studied dance, worked as a union organizer, given birth to her first child, and spent time in factories, offices and restaurants before picking up her first camera in 1974. She enrolled at CalArts to study photography at the age of 27, before receiving an MFA from the University of California, San Diego, and studying folklore at the University of California, Berkeley.

Weems has received numerous prestigious awards for her work, including the Prix de Roma, The National Endowment of the Arts, the U.S. Department of State’s Medals of Arts, the Congressional Black Caucus Foundation’s Lifetime Achievement Award, the BET Honors Visual Artists award, and in 2013, the MacArthur “Genius” grant.

In 2013 and 2014, Nashville’s Frist Center for the Visual Arts organized Carrie Mae Weems: Three Decades of Photography and Video, a 30-year retrospective of Weems’ work which traveled to New York’s Guggenheim Museum, Stanford University, the Cleveland Museum of Art, the Portland Art Museum and other institutions.

She has exhibited both nationally and internationally at venues including the Art Institute of Chicago, the Whitney Museum of American Art, the Museum of Modern Art, the Institute of Contemporary Art/Boston, the Tate Liverpool, the Bilbao Fine Arts Museum, the Centro Andaluz de Arte Contemporáneo and more.