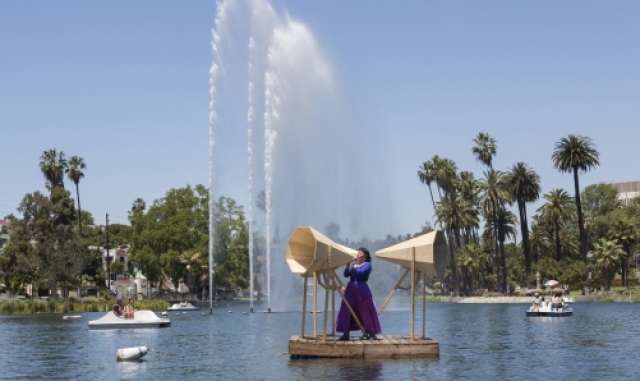 From Jan. 11 through 21, REDCAT presents the Pacific Standard Time Festival: Live Art LA/LA, a celebration of art and performance featuring more than 75 performances staged by over 200 Latin American and Latino artists at 25 different locations across Los Angeles.

Organized by REDCAT in collaboration with numerous arts organizations, the ambitious 11-day festival is presented as part of Pacific Standard Time: LA/LA, The Getty’s effort to unite 70 cultural institutions across Southern California in an exploration of Latin American and Latino art in Los Angeles. Performances—conducted by artists from over a dozen countries—take place in both conventional and unconventional spaces, including parks, plazas, galleries, theaters and urban settings.

These are projects that cross boundaries between art forms: performance, dance, theater. Many of the Los Angeles artists are doing projects that take them in a new direction. And some of the international artists are either coming with their work to L.A. for the first time or are bringing work that is in a very different realm than what they’ve previously done.

On Jan. 12, performance artists will come together for Live Artists Live: Simultaneity, the second iteration of the USC Roski School of Art and Design’s performance art biennial, including a Long Table event led by CalArts alumna Beatriz Cortez (Art MFA 15).

VARIEDADES, an interdisciplinary evening of music, spoken word, theater, comedy and the visual arts—loosely based on the Mexican vaudeville shows of early 20th century Los Angeles—will take place at The Mayan Theater on Jan. 18 with performances by Alice Bag, Cheech Marin, Dorian Wood, and others.

Other events will include a motorcycle performance in Griffith Park by Carmen Argote, a performance with construction vehicles and tons of soil by Mexican collective Teatro Línea de Sombra, an opera and data visualization performance at LACMA devised by Ecuadorian Oscar Santillán, and much more.