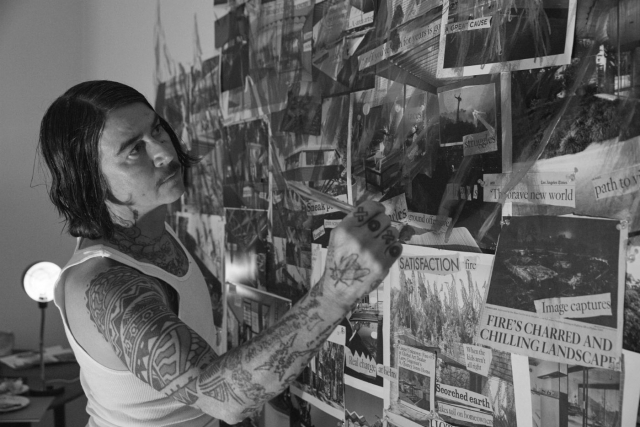 Set in a dystopian Los Angeles, the 22-minute film stars Stosh, a.k.a. Pig Pen–Opie’s close friend and the subject of many of her photographs–as a struggling artist, obsessed with midcentury modern architecture and driven to arson by the crumbling world around him. Composed of more than 800 black and white still images, The Modernist seeks to dialogue with Chris Marker’s 1963 science fiction feature, La Jetée, a story of time travel and nuclear apocalypse told through still photography.

As The New Yorker reported in its profile of Opie last year:

Opie got the idea for the film in the nineties, but, as often happens with her projects, it took on a new significance for her as she made it, with the election of a President who’d promised to return America to the halcyon days before feminism, globalism, and multiculturalism. “ ‘La Jetée’ was about the future,” Opie said. “ ‘The Modernist’ is about nostalgia. The story is about a longing for the past that we can’t obtain.”

Visitors to the gallery will view the film within a specially constructed theater mimicking the lines and curves of the architectural sites depicted in the film. Outside the theater, 33 photographs from the film will line the gallery walls.