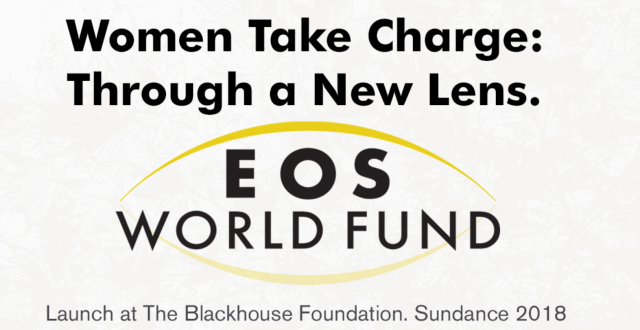 As part of the launch event, Menkes gave her highly anticipated cinematic talk, “Sex and Power; The Visual Language of Oppression.” Her presentation brings to light the connections between Hollywood’s long-standing culture of sexual abuse and assault and the way women are presented on-screen.

In November 2017, Menkes wrote an article previewing her talk at Sundance. Titled “The Visual Language of Oppression: Harvey Wasn’t Working in a Vacuum,” it became Filmmaker Magazine’s most read article of the year.

Support from EOS will go towards financing Menkes’ next feature film, Minotaur Rex, which begins shooting this year.

Nina Menkes’ version of the Minotaur myth is a contemporary tale that features a modern Palestinian man in the hero’s role of Theseus. The story is set now, in today’s Old City of Jerusalem, using narrow streets of the biblical city as a living labyrinth still resonant with the blood of all creatures past and present.

No words can adequately describe Nina’s vision. If it can be put in writing, stylistically Minotaur Rex will combine dream-like, surreal hallucinations with a brutal, quasi-documentary shooting style to create a unique exploration of total crisis in modern-day Jerusalem.

The EOS World Fund Launch is presented by The Blackhouse at Sundance, and sponsored by New York Women in Film, and the African, woman-owned production house: Moon Valley Studios, Hyphenate and California Institute of the Arts.

Film Clip from QUEEN OF DIAMONDS (35mm/77 minutes/1990/color) from Nina Menkes on Vimeo.

Menkes is on a roll of late. Last month, The Film Foundation, established by Martin Scorsese, awarded a a grant to The Academy’ Film Archive to photchemically restore her 1991 feature film Queen of Diamonds, with digitization as well. The Film Foundation grants are given to work that is “culturally and historically significant.”