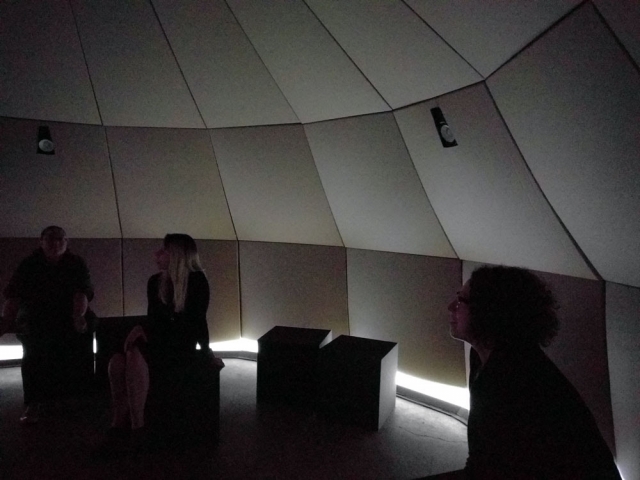 First constructed in 2017, the artist’s immersive sound installation is “an audio model of the stuff in earth’s orbit, in real time.” Visitors walk inside of Neilson’s massive domed structure and, surrounded by a host of surround-sound speakers, listen as actual satellites pass far overhead.

Taking calculations typically used for satellite tracking and visualization, Neilson— an avid ham radio operator—pairs them with actual recordings of satellite transmissions as well as audio files used to represent satellites. Satellite orbital data and audio files are collected from an online database based on the particular location of Sonic Planetarium.

As the Cleveland Plain Dealer wrote of the Sonic Planetarium installation at the Cleveland gallery Spaces earlier this month, “The overall thrust is to communicate an idea of the near-Earth orbital environment as a crowded place pulsing with information and life— a kind of busy beach on the shore of the vast universe that surrounds Earth and our home solar system.”

Neilson is a New York-based interdisciplinary artist interested in the connections between people on the ground and off-planet conditions and infrastructure. Her recent work involves satellite transmissions, weather data-gathering instruments and Menu for Mars Supper Club, a series of dinners envisioning Martian cuisine.

An artist’s reception will be held on Wednesday, Jan. 24, 2018, at the Center for Integrated Media, Room C108, on the CalArts campus.