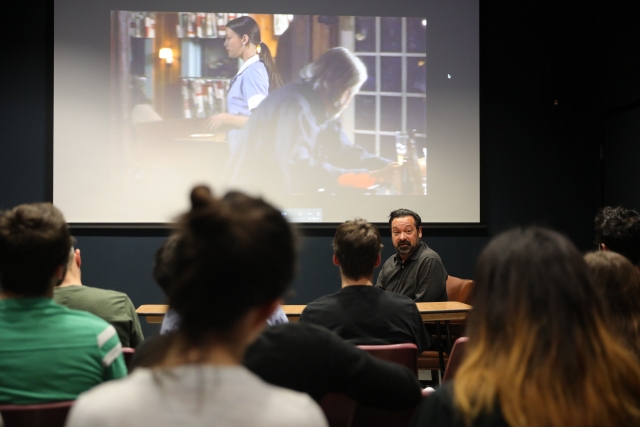 Director and CalArts alumnus James Mangold (Film/Video BFA 85) earned his first Oscar nomination yesterday for Writing (Adapted Screenplay) with Scott Frank and Michael Green for co-penning Logan, the final Wolverine film. The nomination came as a surprise for many, only because films based on comic books are rarely recognized by The Academy. The Hollywood Reporter noted that the film made history as the first superhero movie to ever be nominated in the category.

In a post-nomination interview yesterday with the Los Angeles Times, Mangold—director of films such as Walk the Line, Girl, Interrupted as well as Logan—discussed why he thought mainstream comic book films were finally getting their due:

First of all, I think that there are other filmmakers who have paved the way with their adaptations of comic books that may not have gotten recognition, but have kind of opened people’s minds of the possibility of risk and creative invention in that genre.

On this film, we really focused on doing something different: a dramatic and character-driven film rather than trying to compete in the arms race of comic-book films… “I can spend more than you, I can blow up more than you.” We wanted to make a film that operated on the character engine and emotion. I’ve been really gratified by the way fans have embraced the movie.

In Variety last November, Mangold credited his CalArts mentor, director Alexander Mackendrick (The Ladykillers), who stressed character development and story more than anything else. Mangold was asked about the advice Mackendrick offered him as a student. This was his response:

I was his teaching assistant for two years. In my third year, he wanted me to transfer to the acting school. He said the problem for most filmmakers is that they focused on the equipment, on the technical aspects of making a movie — but they were lost when it came to blocking, acting and working out the story with actors. He thought the actual act of telling a story in front of a camera was the greatest challenge for young filmmakers. I think it still is. Sandy believed you didn’t need more than what Orson Welles had in terms of technology, and it’s really about what you’re putting in front of the camera that determines the quality of the film. To some directors, the crane shot and the digital-vs-film arguments and the prime-vs.-zoom lens athleticism are more attractive than the nuts and bolts of “How do I make an emotionally arresting scene that moves you?”

The film and script for Logan, based on Mangold’s story, has been widely praised for its emphasis on the interpersonal relationships between Hugh Jackman’s Logan and his frail mentor, Professor X (Patrick Stewart), and between Logan and his daughter (Dafne Keen).

When the Academy Awards are handed out on March 4, movie and comic book fans alike will see if Logan can make film history (again).