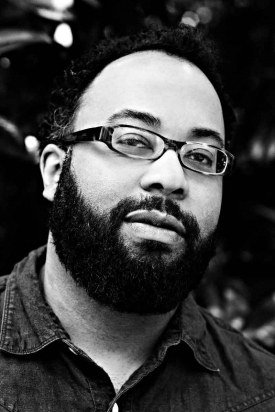 Earlier this month, CalArts announced that poet and scholar Kevin Young had been selected as the Katie Jacobson Writer-in-Residence for 2018.

As part of the residency, Young will conduct workshops with students in the CalArts MFA Creative Writing Program and present two public readings: at CalArts and REDCAT. (**These dates are TBD as he’s had to postpone the originally scheduled dates of Feb. 15-16)

Called “one of the most important poets of his generation” by the Washington Post, Young is the author of 12 books of poetry and prose. His most recent nonfiction book, Bunk: The Rise of Hoaxes, Humbug, Plagiarists, Phonies, Post-Facts, and Fake News, was released in November 2017 and is a finalist for the National Book Critics Circle Award, was longlisted for the National Book Award and has been heralded by publications across the country.

A former University Distinguished Professor and curator of the Raymond Danowski Poetry Library at Emory University, Young moved to New York City in 2016 to become director of the New York Public Library’s Schomberg Center for Research in Black Culture and, in 2017, was named Poetry Editor of The New Yorker.

In a November 2017 Esquire profile titled, “Can Kevin Young Make Poetry Matter Again?,” poet and editor Jordan Davis said of Young, “He holds a sort of senatorial authority. He has really mastered the popular voice and speaking to enormous public concerns. It’s a kind of public-speaker role for poetry that has gone unoccupied pretty much since Allen Ginsberg died.”

The Katie Jacobson Writer-in-Residence Program was established in 2013–as part of the MFA Creative Writing Program–to bring prestigious writers to the CalArts campus for a public reading, classroom visit,and to meet with students one-on-one. Past writers-in-residence have included Junot Díaz, George Saunders, Samuel Delany and Lydia Davis.

Kevin Young: Writer in Residence at CalArts and REDCAT