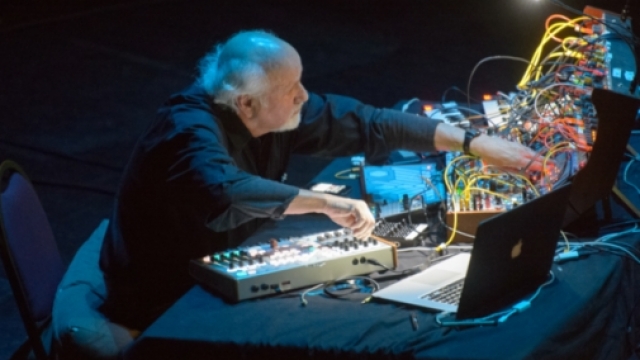 Morton Subotnick performs at REDCAT this week. | Photo: Courtesy of the artist

Released on Nonesuch Records in 1967, Silver Apples was the first electronic work commissioned by a record company and considered a technological and artistic masterpiece upon its release.

With a name taken from poet W.B. Yeats’ “The Song of Wandering Aengus,” Subotnick’s first full-length LP consists of two roughly 15-minute tracks performed by the composer himself on his Buchla synthesizer (a technology Sobitnick and collaborator Ramon Sender commissioned in the early 1960s as quite possibly the first analog synthesizer). A crucial milestone in electronic music, the album was entered into the Library of Congress’ National Registry of Recorded Works in 2010.

During the concert at REDCAT, Subotnick will preside over an onstage studio and perform the entirety of Silver Apples. Afterwards, he will present Crowds and Power, a media tone poem inspired by Elias Canetti’s book of the same name. Legendary avant-garde vocalist Joan La Barbara will play the central character and a live visual environment will be provided by Berlin-based artist Lillevan.

Called “the founding father of electronica” (BBC), Subotnick is renowned as a composer, innovator and pioneer in the development of electronic music, multimedia performance and interactive computer music systems.

In 1969, Subtonick was invited to help a team of artists plan a new school of the arts in Los Angeles. Alongside Mel Powell, he helped establish the CalArts School of Music and served as its Associate Dean for four years before becoming head of the composition program and introducing interactive technology and multimedia into the curriculum.

Morton Subotnick: 50th Anniversary of Silver Apples of the Moon