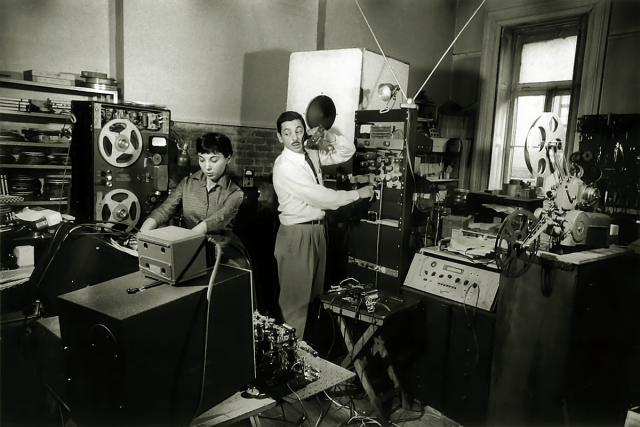 On Feb. 20, former CalArts composition faculty and alum Barry Schrader (Music MFA 71) made his return to campus as a guest speaker of the Women in Electronic Music lecture series.

The lecture was part the Women in Electronic Music: History & Practice class, taught by Anne Lebaron and Sarah Reid, which highlights the contributions of women in electronic music. Schrader expounded on works of pioneer Bebe Barron, who teamed up with husband Louis Barron, to create some of the most iconic electronic music in cinema. Barron was born Charlotte May Wind in Minneapolis on June 16, 1925, and passed away on April 20, 2008, in Los Angeles. She attended the University of Minnesota, where she studied piano and took a postgraduate degree in political science. She studied composition with Roque Cordero in Minneapolis and then with Wallingford Riegger and Henry Cowell once she moved to New York City in 1947. (The same year she met and married Louis). She also spent a year studying composition and ethnomusicology at the University of New Mexico.

A close friend of the Barrons, Schrader gave insight into the process of their artistry along with the history of some of their more iconic works. Schrader explained to attendees that as a wedding present, the Barrons received a tape recorder, possibly a 3M German Magnetaphon that they used to make their electronic recordings. It was one of the first-ever tape recorders in the U.S., and they used it to open an electronic music studio located in New York’s Greenwich Village—thought to be the first electronic music studio in America.

According to Schrader, the book Cybernetics (1948) by Norbert Weiner—one of the earliest books written about artificial intelligence (AI)—was very influential to the Barrons. They made circuits out of vacuum tubes and used them create sounds and music. Some of the Barrons’ early recordings include Heavenly Menagerie (1951-52), Bells of Atlantis (1952), For an Electronic Nervous System (1954) and Miramagic (1954).

During the lecture, Schrader noted that Bells of Atlantis (1952) was the first film with an electronic music score, specifically made for the picture. Their most notable work was for Forbidden Planet (1956), the first commercial film with an electronic score. According to Schrader, the American Federation of Musicians union prevented the Barrons from calling it music and had to call it “electronic tonalities” instead. Because of that name change, their names were left off the film’s Oscar nomination.

The music and sound design from Forbidden Planet has been widely borrowed and used elsewhere. The “hum” in the beginning of the film has been imitated by Ridley Scott for Alien (1979) and for other space horror films. Schrader explained that before their soundtrack, there was no music to visualize a space film like the one that the Barrons created for Forbidden Planet. While their influential work is now associated with the sound of sci-fi films, the pair, unfortunately, never scored music for another film again.

The Barrons were divorced in 1970 but continued to work together since Louis had all the equipment to create their style of music. She and Louis Barron were presented with the SEAMUS (Society for Electro-Acoustic Music in the United States) Lifetime Achievement Award in 1997; Bebe was the first woman to receive the award.

Before she passed away, Bebe Barron composed her first, and only, solo musical composition Mixed Emotions (2000).

Schrader concluded the talk by noting that although she lived in Louis’ shadow, Bebe established her own legacy to the electronic music world with her contributions to Forbidden Planet and her own piece of music near the end of her life that she was able to call her own.