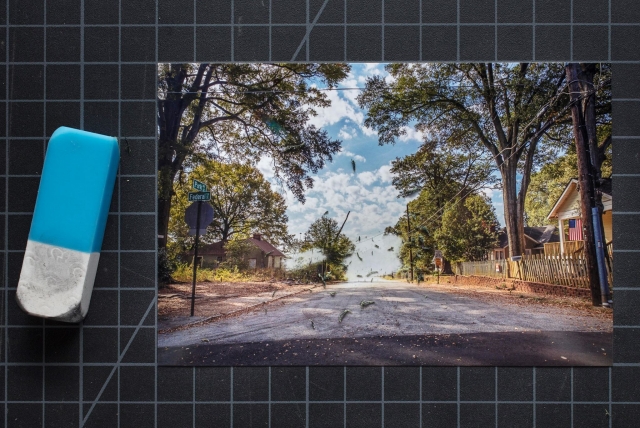 Degrees of Visibility is a photography series by Hunt that documents the spaces surrounding prisons and jails throughout America’s 50 states and territories. The photos, titled with the numbers of inmates inside of each facility, are juxtaposed with quantitative information and other objects such as blueprints, graphics and sheet music.

“Degrees of Visibility” follows 17 years of Hunt’s dedication to prison issues, which began with his time-based media installations, “Housing, Process, Movement” (2000) and the feature documentary, “Corrections” (2001). Beyond taking the prison as a conventional subject matter, his work has consistently sought to contribute to the building of social movement against the inequities that the prison ensures. In this way, the work attempts to challenge how we think about audience and the function of art in relation to it — pushing against the separations between formal art spaces and those of organizing and activism, while asking, in partnership with grassroots organizations, what can be done?

As recent political changes in the U.S. have begun to reinvest state resources into mass policing, surveillance and incarceration, and thus in their disproportionate impact on the poor and communities of color, “Degrees of Visibility” offers an important platform for reflection, discussion and response to these urgent questions. Extending Hunt’s investigations into the spaces where we encounter prisons each day, often with little or no sense of what we have or have not seen, the work studies this camouflage as a “politics of appearance,” an aesthetic coordination of our environment that has political effects — effects that are as integral to today’s system of mass imprisonment as its walls, fences, weapons, laws and cages.

Degrees of Visibility is on view through March 26.