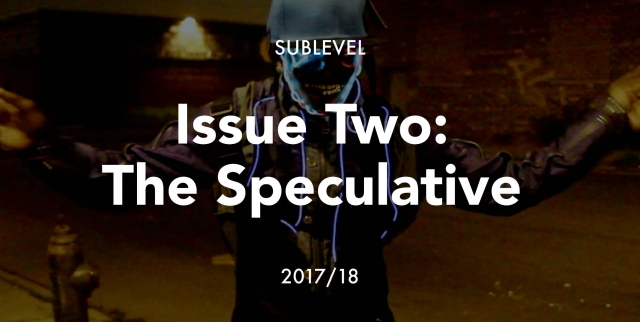 The second issue of the online magazine ‘Sublevel’ was released on March 1. | Image: ‘Sublevel’

Sublevel, an online publication devoted to the “nexus of literature, poetics, art, criticism, philosophy, culture and politics” and housed within CalArts MFA Creative Writing Program, released its second issue, “The Speculative,” on March 1.

The issue contains features that examine what could be, might have been or what is, and includes: a roundtable on “the speculative” with artist Kelly Akashi, the collective FICTILIS, author Margaret Killjoy and editor and anthologist Ann VanderMeer; a conversation between artist and CalArts School of Art faculty member Martine Syms and Jenna Wortham, a culture technology reporter and staff writer for the The New York Times Magazine; a virtual exhibition featuring 57 Cell, Sascha Braunig, Loretta Fahrenholz, Kiki Kogelnik, Nicole Miller, Christina Quarles and Tiger Tateishi; and more.

Within the eight features of our magazine, we will explore: the defamiliarizing of the familiar as a crucial tactic for investigating reality; how science fiction, fantasy, and horror not only pervade media but influence collective political and social efforts; the ways in which new technologies are pushing us toward a slippage of communication, dislodging language from reality; the space that the speculative and speculation provide for an intersection of academics and autodidacts alike; how speculation has shaped, and continues to shape, the current economic climate, specifically in relation to Los Angeles.

Myths, folktales, “what ifs,” and ideas of the unreal have informed our understandings of ourselves throughout our history. The vastness of speculation draws us in, causes confusion that feels intoxicating and creates a space for hyperbole and fantasy that feel less and less unfamiliar. It is through this very interrogation—of the impossible—that we continue to discover what is, in fact, possible. In this issue, we are not offering solutions, or at least not solutions that make sense. We are observing the impact, use, and character of the imagination on culture and, as a result, on our own psyches. When we think of the speculative, not only are we thinking about what could be—we’re questioning the validity of what’s happening now. We create new shapes, imagine hidden doors. Its potency is in its relevance.

The second issue’s “B-sides” print counterpart is slated for release in May.