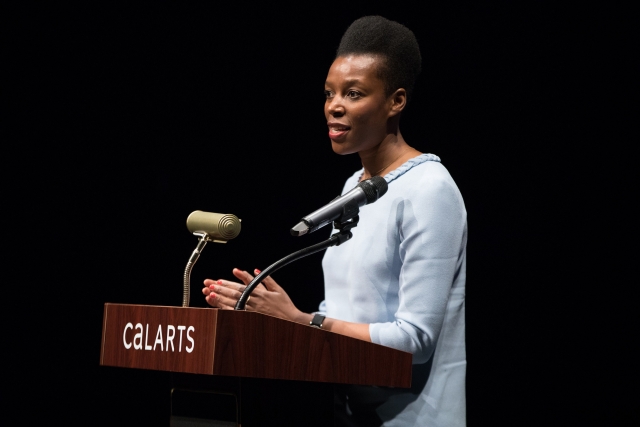 Last month, Elizabeth Nyamayaro, Global Head of UN Women HeForShe Movement, visited CalArts to discuss a new partnership between the Institute and the UN’s HeForShe movement—an initiative that calls on men around the world to stand together in solidarity with each other and with women, to end sexual harassment and promote gender equality.

The UN Women’s special project is being conducted at CalArts through the Animated United Nations Women class, taught by School of Film/Video faculty Pia Borg and Soyeon Kim (Film/Video MFA 01).

Nyamayaro told an audience gathered in the Lund Theater on Feb. 12 that by engaging with CalArts students, UN Women hopes to develop 12 to 15 short videos (15-30 seconds each) through the class, which each tell #HeForShe stories, furthering the movement’s mission and message.

The CalArts’ student films will be highlighted on stage during the HeForShe IMPACT Summit in September 2018 at the United Nations General Assembly in New York, followed by distribution through HeForShe’s social media channels. Nyamayaro added that the videos will be translated into the UN’s six official languages: Arabic, Chinese, French, Russian, Spanish (and English) for its 194 member states.

“CalArts will really be a pioneer in this kind of work,” Nyamayaro said, referring to the one-of-a-kind partnership with the Institute.

For their efforts, the students accepted into Borg’s class will also each receive a $500 scholarship added to their financial aid portfolio in April.

During her formal visit at CalArts, Nyamayaro spoke briefly about her journey from a school girl growing up in Zimbabwe to her current role with the UN. Growing up in an impoverished community suffering from drought and famine, she recalled encountering a “girl in the blue uniform” two days after her last meal. It was the first time the young Nyamayaro had benefited from help from UN aid workers, and the experience left an indelible mark: “We must uplift each other,” she told the Lund audience.

Nyamayaro has focused much of her professional life on working toward racial, gender and social equality, and helped develop HeForShe, which launched in 2014 and immediately “flipped the script on gender equality.”

Nyamayaro said that HeForShe’s push toward gender equality must be seen as a “human rights issue,” and added that the movement cannot work if it’s seen as coming from a polarizing, men vs. women mentality.

“Creating lasting change requires all of us,” Nyamayaro said.