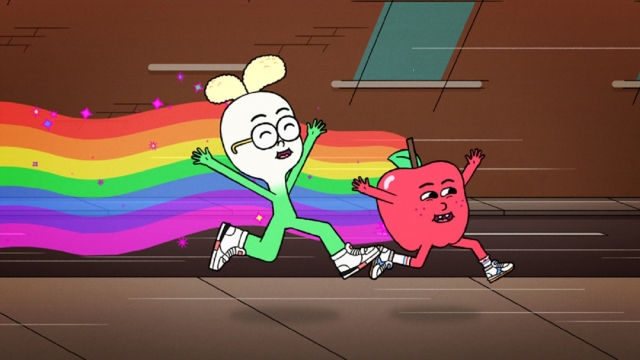 On Feb. 23, Cartoon Network premiered the animated buddy comedy Apple & Onion on Adult Swim. The limited 10-episode series follows the characters of Apple and Onion as they independently move into the big city from their respective hometowns, find each other and team up for a series of hilarious predicaments and adventures.

Laying down the soundtrack for the duo’s capers is CalArts alum Paul Fraser (Music MFA 11), who composed the score and co-wrote the theme song for the new series. Fraser subscribes to a genre-agnostic approach to composition, encompassing electronic and acoustic music: orchestral, chamber, choral, pop/electronic, and experimental. Some of his other previous collaborations include works used by Disney, Dreamworks, Funny or Die, MTV, Nickelodeon, Warner Bros., and more.

The show’s creator, George Gendi, is a former storyboard artist on The Amazing World Of Gumball and Nickelodeon’s Sanjay And Craig.

New episodes are now airing back-to-back every Friday through the end of March on Cartoon Network, so it’s not too late to catch Apple & Onion. You can also watch them on Cartoon Network’s app and on-demand one week before each episode hits the airwaves.